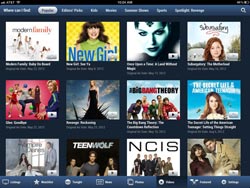 Among the explosion of social TV apps from IntoNow to Shazam to Viggle, TV Guide is hardly a new name. The brand dates back to the earliest days of television, decades before the arrival of mobile phones.

Still, TV Guide has established itself in the smartphone era through an app launched in 2009, which has had 7 million downloads to date on the iPhone and other platforms.

Building on its goal of one-stop-shop for TV listings and content cross-platform, the company launched a revamped version of its app for iOS devices Thursday. Features are geared toward greater personalization and social sharing.

The centerpiece of the updated app is the Watchlist, an interactive tool extended from the TVGuide Web site that allows users to customize listings on a single screen by adding favorite shows, sports teams, actors and movies they want to track.

The feature will show how to watch preferred content, whether on TV, on-demand, streaming or DVD. People can also share what they are watching via social networks and link directly to streaming services from ABC, Hulu Plus, HBO Go, iTunes and others.

The 500,000 people who have already created Watchlists on TVGuide.com will be able to port over their accounts to the new app. Christy Tanner, EVP and general manager of TVGuide.com and TV Guide Mobile, said the focus on giving users a personalized directory stemmed from internal research showing that people need a way to keep up with all the different viewing choices.

Among other new features, the app has also added a hot list dubbed "New Tonight Trending," based on social check-in activity about what people are watching, along with Watchlist filters for news and "new tonight." Users can check in to share and discuss what they are watching via the app.

When it comes to advertising, Tanner says TV Guide focuses in on “beyond-the-banner” formats. She said the company has already sold 100 sponsorships since last year around check-ins (on TVGuide.com) and will add the ability to sponsor the “Add to Watchlist” button and content channels in the new app as well.

By doubling down on discovery and original content, TV Guide wants to set itself apart from the growing pack of social TV apps. “It's really about a bond between fans and the shows they love,” she said.

How does that translate into usage? Tanner said the TV Guide app currently has 1.5 million active users who spend 15 minutes on average each month using it. The company also says its 7 million downloads puts it ahead of other TV apps, including HBO Go, Xfinity, and GetGlue, based on various data sources.

As far as ratings, the TVGuide app has earned three out of five stars in the iTunes App Store based on input from 35,320 users. That's better than HBO Go and Xfinity, for example, but not as good as four-star rated GetGlue.

The new TV Guide app for Android devices will roll out this fall.