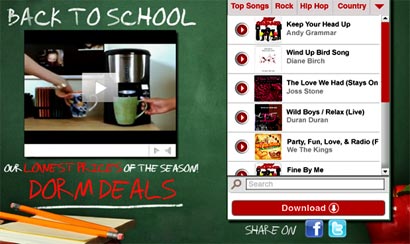 Publishers want to give readers freebees, but not if it means the visitor must jump to an advertiser's site when they download the content or run a video. If the brand requires a Twitter tweet in exchange for the free content--all the better.

Social sharing and video views led Music Interactive to bring publishers an ad unit allowing site visitors to download a free piece of music in exchange for a tweet, according to Trey Shelton, CEO and founder of Music Interactive. The Web site visitor would have a choice from one of three pre-populated messages, such as "I just downloaded 'Yes' from Chad Brock on WaPo."

The social element expands on an ad unit Music Interactive rolled out Thursday with Jivox that allows users to share the ad on Facebook, Twitter or Pinterest. The unit, Maestro, features a video ad with a music reward in a variety of formats, including the IAB Rising Stars ad unit for mobile and display, as well as the video ad units when they become available.

The ability to stream free music from an ad isn't new, but the strategy lets brands work with musicians to align with pop culture. It also lets publishers keep readers on the Web site, rather than the brand sending them to iTunes or another landing page.

Once the Jivox ad plays, viewers will receive a free sponsored MP3 download from the Music Interactive library, one of thousands of songs that play on any device. They are neither tethered nor DRM-encoded.

The platform also sorts its vast music library to offer the most popular songs, which will appear at the top, each time the ad loads. The video ad and music reward are both self-contained within the ad unit. Music Interactive holds the relationships and music rights for songs on the list, Shelton said.

When brands associate with one artist, they must secure artist's permission, Shelton said. "But if you're listing a full label catalog, you can offer up the entire list. Still, some artists might want to exclude their name from the list," he said.