Lincoln To Build Presence In China 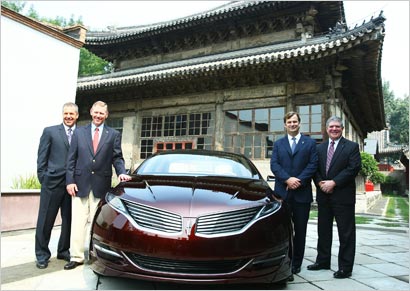 Lincoln has designs on China. Ford's evanescing luxury brand sees that gigantic market, which has an affinity for American luxury brands that dates back to its party cadres driving big Detroit cars around Beijing.

The Dearborn, Mich. automaker says the move to put Lincoln in China by the second half of 2014 is part of its largest expansion in 50 years -- which will boost Ford's global sales by 50% from 2010 to about 8 million vehicles annually by mid-decade, the company predicts.

Lincoln and Ford executives will start meeting with independent dealers there in the fourth quarter.

Ford cites a study on the Chinese auto market by global market research firm IHS, which says the luxury segment in China will surpass that of the U.S. by 2020, with luxury vehicle sales expected to rise from 6% of the China auto market today to nearly 9% by the end of the decade. The research firm predicts annual sales of luxury cars in China to be approximately 2.7 million units by decade's end.

Jesse Toprak, head of global automotive research at TrueCar.com, tells Marketing Daily that Lincoln has a shot in China that it doesn't have in the U.S. "Lincoln's brand equity there is not as strong as Cadillac or even Buick, but there is still name recognition for Lincoln, and, as China is a growing market where status symbols are a valuable commodity, they could be the new kid on the block in terms of products that differentiate people with money." In the U.S., he notes, Lincoln is struggling. "In the U.S. they are just trying to survive; in China they can thrive."

Said Jim Farley, Ford Group VP of global marketing sales and service, in a statement: "In China, the emerging luxury buyers are younger and fast-changing, and they have a strong desire to understand and appreciate the heritage of a brand." He added that Lincoln will "distinguish itself by providing more individual and personalized motor cars, and a more personal and crafted experience to match."

Dave Schoch, chairman and CEO of Ford Motor China, said the company expects to deliver 15 new Ford-branded vehicles and 20 powertrains there by 2015. To do that, Ford reports that it will build five new plants in China, including in Chongqing, which is home to the largest manufacturing location for Ford outside southeast Michigan. The plants will double Ford's China capacity to 1.2 million passenger vehicles a year.

While the Lincoln arrives late to the game versus the German luxury brands and rivals Cadillac and Buick, it's not too late to get in the game, per Toprak. "They need to establish the dealer network, brand equity and hopefully some customer loyalty, but it's not too late." He points out that German brands dominate the China market, as nearly three out of four luxury cars sold there wear the Audi, BMW or Mercedes-Benz logo.