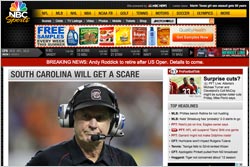 NBC is taking an Olympics app that served as a TV Everywhere offering during the games and refashioning it as a general sports programming hub. The goal is to capitalize on the amount of online viewing the Olympics generated.

During the Olympics, customers with a cable subscription with MSNBC and CNBC were able to watch 3,500 hours of coverage online for free. The new NBC Sports Live Extra will have live feeds of events airing on multiple NBCUniversal properties, including the NBC Sports Network and Golf Channel.

Events will include National Hockey League games, Notre Dame football and the Ryder Cup. The app will also include social media opportunities and content supplementing the broadcasts.

Viewers who downloaded the Olympic app will get NBC Sports through an update process. There are opportunities to use it via iOS, Android and Google Play platforms.

NBC said there were 23.8 million live streams during the Olympics, while a live stream of the Super Bowl this year had 2.1 million users.

Rick Cordella, a senior vice president in the NBC Sports digital operations, stated the app could be used as a primary or secondary screen. "We will extend the expertise we have accrued by streaming some of the most popular sporting events to our year-round sports on multiple devices.”