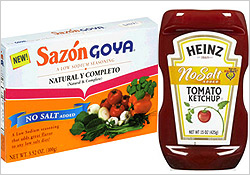 Despite increased awareness about the risks of too much sodium in diets, launches of products making low/no/reduced sodium claims are declining, reports Mintel.

Globally, the number of launches carrying such claims declined by 5% over the 2010-11 period, appearing on just 2% of total food launches in 2011, Mintel’s Global New Products Database (GNPD) shows.

Europe remains the most active, with a 35% share in both 2011 and 2010, versus a 39% share in 2007. In the Netherlands, where the food industry has implemented a campaign featuring on-pack logos to indicate new or reformulated products that are low in sugar, sodium and saturated fat, 9% of all new products carried low/no/reduced sodium claims. The U.K. was next-highest (3%).

Brands:  ‘Stealth Health’ and Other Strategies

Mintel’s research shows that 54% of U.S. consumers say they limit their use of packaged snacks and other packaged foods because they think they have too much salt or sodium, and that 53% are concerned about the amount of salt or sodium in their diets.

However, nearly half (46%) of U.S. consumers think that products flavored with non-sodium or salt alternatives don’t taste as good as their traditional counterparts, and 60% of U.S. restaurant diners typically order what they want instead of what is healthy.

“A large percentage of the global food industry remains wary of the commercial impacts of reducing salt in their products,” says Mintel global food and drink analyst Chris Brockman. “This anxiety is well-founded, with many products positioned as low sodium forced off the shelves prematurely in recent years due to poor sales. Manufacturers struggled to find workable salt substitutes, forcing many to rapidly pull them from the market. Efforts are being made to offer consumers alternatives to sodium. However, existing salt replacements have not caught the imagination of consumers. Consumers are concerned about salt intake, but are not willing to compromise on taste.

“Brands will need to dispel the widely held perception about low sodium or salt alternatives to be successful,” Brockman sums up. “Fortunately, this is possible.”

Other brands are experimenting with flavor profiles, such as strong spices and vinegars, to enhance taste while reducing sodium -- or “tricking” consumer taste buds with strong smells.

Such tactics fall into a broader trend, which Mintel dubs “Fauxthenticity,” in which food alternatives can become preferable to real versions because they are healthier, greener or more affordable. The trend also extends to non-food items, like sunless tanners and artificial grass, the research firm notes.

In the overall “minus” claim category -- products positioned with low/no/reduced formulations such as reduced calories, fat, sugar or cholesterol -- Mintel's GNPD shows a global decline of 10% over the year 2010-2011.

While Mintel doesn’t cite reasons for these declines, various recent research (and sales statistics) have shown consumer perceptions of “healthy” products shifting from those offering reduced “unhealthy” properties toward those offering “natural” claims.