Showrooming Is More About Confidence Than Comparison 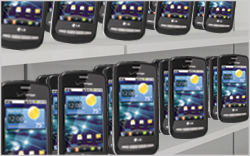 That nightmare showrooming scenario may be closer to a bad pipe dream than reality. The use of cell phones in a store is much more complicated than simply having a shopper hijacked by Amazon or the super store down the road. According to a new research survey commissioned by mobile marketing and technology company Vibes with Research Now, nearly half (48%) of those who scanned text messaged for more product information in-store said the key result was that they felt better about their purchase. In fact, while 84% of the 1,006 phone users surveyed said they had used their phones to research in-store, and a third said they had consulted a competitor’s site, only 6% of the total mobile population were likely to abandon a purchase in order to go to a competitor.

The research demonstrates an evolution in retailer and mobile marketing understanding of showrooming. It may not be a bad thing for retailers at all, says Jack Philbin, CEO, Vibes. “I think it is a good thing, but only for the retailers that embrace it,” he says. “There should be less focus on whether showrooming is good or bad. It is a reality.”

Also commonly misunderstood by many retailers, the research suggests, is the fact that in-store mobile research often benefits the brand later on the Web. The Vibes survey found 29% of shoppers who showroomed ended up going to that brand’s Web store to make their purchase there. Retailers are distinguishing between brick and mortar and online experiences, Vibes says, but consumer are not. But fear of competition is just as real now as it ever was. While 29% of showroomers eventually bought from that retailer online, 25% of showroomers bought from the competition.

Fundamental to the showrooming “reality” is the consumer need for reassurance. Indeed, the pool of respondents is parsed down into smartphone owners, 33% of whom said they visited a competitor by phone while in a rival store. But almost as many were simply after product reviews (31%) or were scanning codes (27%) or went to that store’s own sites or used the brand's app (17%).

In seeking confidence about their purchase, consumers seem to be looking for some greater emotional connect with the brand or rationale for buying something, Philbin says. “Shopper confidence is hugely important,” he says. “Even if I overpaid, I have these bullet points in my head for why I made a good decisions. I don’t think that can be underestimated.”

Retailers need to aim their efforts at improving the flow of information and the emotional connection with the store brand, Philbin says. When in store, mobile search appears to be a critical point of entry, so mobile Web sites have to have easy access -- especially to user reviews.

Part of building shopper confidence via mobile has to do with understanding the basic empowerment the consumer feel by using the device in-store. Shoppers like having a device that is more personal and less pushy than a store salesperson. “You don’t want to be sold anything,” says Philbin. “People are using their phones as their personal assistant. Your phone is never going to try to sell you anything. It is just going to give you data,” he says.

behavioral targeting, data-targeting, mobile
1 comment about "Showrooming Is More About Confidence Than Comparison ".
Check to receive email when comments are posted.
Next story loading