The Whole Story - Social Networking - The Hierarchy of Devices

The latest release of USA TouchPoints (2012.2) is made up of two waves of data. The most recent of these waves shows continued overall growth in social networking among all adults 18-64. It also breaks down average weekly reach by
device.

• This gives a clear picture of the relative position of each of the key devices used for social networking in the overall hierarchy.

• With a weekly reach of 40% (equivalent to the weekly reach of DVR viewing – USA TouchPoints 2012.2), social media across all platforms continues to exert a hold on an ever-broader base of the adult population.

• All will continue to grow, but both mobile phone and tablet are likely to show faster rates of growth over the coming year than computers as penetration of smartphones and yablets and social networking platforms continue to invest in the mobile space. 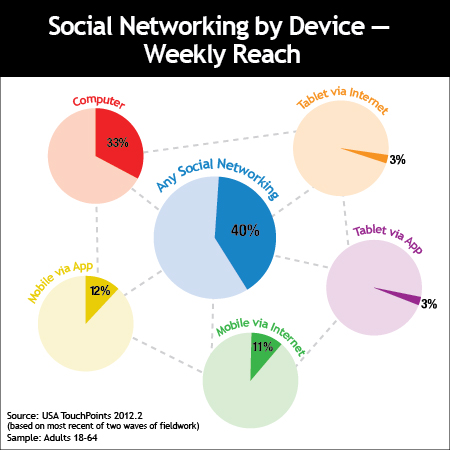 Source: USA TouchPoints 2012.2 (based on most recent of two waves of
fieldwork)
Sample: Adults 18-64