Need You Now - I'm Talking About You, Air Play

Cut Copy’s song “Need You Now” reminded me of what iPhone fans were probably thinking as they drooled over their monitors watching the official introduction of iPhone 5. And, if you’re like a lot of iPhone fans, you woke up Sept. 12 and thought it felt like Christmas or Hanukah and couldn’t wait to see what the elves in Cupertino had cooked up for the iPhone 5.

There were certainly a lot of great updates and features of the new iPhone 5 that have many of us buzzing, and we can’t wait to get our phones on Sept. 21. Certainly, the new four-inch Retina will be great for making video and almost any multiscreen experience better; the faster A6 chip will make game play even faster. But there is more that Apple really hasn’t even mentioned. 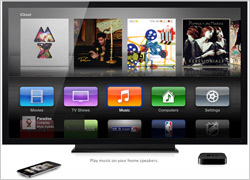 Back in 2006, I made the assertion that “Apple would own the Family Room experience.” I still believe this, and Apple is well on its way to doing just that. Back in 2006, they started shipping remotes with their laptops and Mac Minis, and, by doing so, they encouraged us to think differently about the computer as an entertainment device just as we view a DVD player.

Apple has always been great at creating a trail of breadcrumbs to the Promised Land. Over the last few years they introduced us to “AirPlay,” and this icon started to appear in devices like AirPort Express and then in AppleTV. At first, AirPlay let you stream music from a device (desktop, laptop, etc) to your stereo via AirPort Express. Then, Apple made AirPlay part of AppleTV, and you could stream video and pictures. And, if you have updated to OS X Mountain Lion, then you know AirPlay is now built into the OS. Today, AirPlay enables steaming video, audio, pictures, and, with OS X, you can mirror your desktop to your TV screen via AppleTV. Apple has yet to announce a TV. With AirPlay, do they need to? 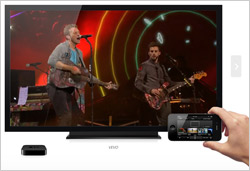 AirPlay is brilliant, and, furthermore, it drives a seamless, multiscreen experience that all of us have come to expect, especially when we start a movie, song or video game from our iPhone, iPad or iPod and want to continue on a larger screen. I would say that Apple has indeed found a way to own the “Family Room” experience. They have continually innovated, put features in low-risk products such as AirPort Express, and pushed from the margins to tell us how the experience could be shaped. In many ways, this delivers on what Steve Jobs believed – Apple introduced devices to do things most consumers could not conceive until Apple demonstrated what was possible. As Jobs once said, “It isn’t the consumer’s job to know what they want.”

If you’re an entertainment marketer, take a page from Apple’s AirPlay, and think about your strategy and what you are doing to show consumers what is possible and take advantage of the power of a multiscreen experience. In the meantime, I’ll be using my iPad as a remote, streaming music, movies and photos to my flatscreen from the couch. I’ll save some popcorn for you.