Sweet and Creepy: When Candy Bars Stalk You 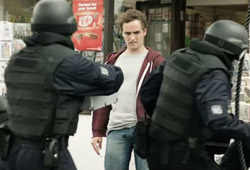 When we brought OMMA Display to London last week, I fully expected that our panel on privacy would be an object lesson in how much sterner the UK and European markets are about consumer protection. A new “Cookie Directive” had gone into force late last spring that was supposed to require publishers to get consent from users to be tracked. Well, apparently even the folks across the pond are still a bit undecided and unclear about what constitutes consent.

The rules were adjusted by the UK Information Commission right before EU regulations were to go into effect. Under the UK rules, a site did not need to get explicit and prior permission to plant a cookie on a user’s browser, because the user's presence on the site was evidence of implied consent. Let the skirmishes begin. If you go to some but not all UK sites now, many will meet you with a small pop-up that either warns you are going to be cookied or asks for your explicit agreement before entering. But there is evidence that a great many sites were just not implementing any courtesy to new users.

At OMMA Display in London there was a lot of back and forth about what the Directive really required. Audience members asked the IAB UK and other associations for some guidance. As a neophyte Yank in the midst of all this I certainly came away feeling that the European community was fracturing not just on monetary policy but on privacy policy as well. And as a number of the companies involved in ad networking and privacy projects go international, the pressure to standardize some of these practices across borders will only intensify.

So it was ironic that upon my return to the States I discovered that the UK is actually the scene of one of the most outrageously over-the-top instances of tracking in marketing. Over there, a candy bar can follow you. In a truly bizarre campaign by Nestle in the UK, a GPS tracker is being implanted in select candy bars. The unabashedly named “We Will Track You” campaign advertises six “lucky” packs of Kit Kat, Aero Peppermint or Yorkie Milk bars with tracking devices that will alert a crack team to find you and award you with prizes. The prize team “will leap into action locating the winner within 24 hours,” a Nestle spokesman told the York Press.

It gets better. In a video outlining the program, commandos descend from the heavens upon an unsuspecting man leaving a candy shop to award him 10,000 pounds.  No, you have to see this to believe it.

There are some logistics to this I don’t quite get. If the tracking device is in the wrapper, then what happens to the purchaser who eats the candy right away and tosses the wrapper away? My wife speculated wildly that maybe they put the tracker in the candy itself so that the user ingests and keeps it with them. “But then there would be a limited time for them to find you in that case, too,” she quipped.

Nestle says the campaign is meant to appeal to men in order to drive incremental sales of individual candy bars. Because what red-blooded British bloke doesn’t want to be surrounded by black-garbed commandos?

The weird genius of this campaign is that it overcomes creepiness by engaging it head-on and turning it into fun with humor and deliberate overkill. They won’t just track you. They will hunt you down, albeit with the value-add of all value-adds, cold hard cash. I mean, who is going to toggle the Do Not Track opt-out on that one? The TV creative fully embraces the weirdness of it all and bilks the surveillance, black helicopter meme for all it is worth. You do have to wonder: What is the policy on whether buying the candy in the first place constitutes implied consent to be tracked?