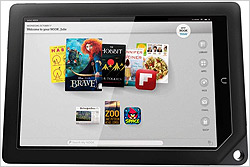 While you wouldn’t know it from the analyst breakdowns of tablet market share and press coverage, there really is a third tablet in the market. Walk into any Barnes & Noble and a good chunk of the retail space, and at least one salesperson, are dedicated to selling the Nook Tablet and other Nook readers. And while the interface somehow manages to be even less engaging than Kindle Fire’s, the Nook Tablet is, in fact, an able piece of hardware. I have used it on and off for the past nine months in the same way most 7-inch tablet owners seem to use these devices -- more as readers than as multimedia hubs.

But in the struggle for half-sized tablets to become real content consumption devices, Barnes & Noble always suffered a disadvantage against Apple and Amazon -- no video model. Amazon has its Prime membership that accesses streaming media or rentals. Apple, of course, has iTunes. Finally, this week, B&N gets into video. Nook video will bring an iTunes model of film and TV rentals and purchases to the Nook ecosystem.

B&N has cut deals with the major studios for bringing content into a series of Nook video apps for the devices. Content will be stored in a cloud for downloading or streaming to multiple devices a customer might own. An interesting value-add will be the integration of UltraViolet, the service that allows the compatible DVD/BD disc to provide a cloud-based digital copy of the physical disc that consumers buy. B&N is one of the largest distributors of entertainment discs, and this presumably gives the company a retail merchandising component that Amazon and Apple don’t have. But of course this has always been the case for B&N -- yet it is unclear how much the company really has gained from having the Nook presence in stores.

And just this morning, B&N also entered the big tablet fray. Echoing Amazon’s new line of Kindle Fires, B&N will launch a Nook HD -- a $199 7-inch device that claims to have the highest resolution amd lightest carrying weight at that scale -- and a 9-inch Nook HD+, which is starting at $269. The book retailer is trying to outgun Amazon on pixels with the HD and undercut Amazon on price with a $269 larger device. Amazon Kindle Fires in the larger format are starting at $299.

When it comes to smaller tablets, we wait for a final player to come to market in coming weeks -- Apple and its rumored iPad mini.

The tech blogs will debate the relative technical merits of the various tablet offerings, but I doubt that incremental differences among tablet specs will be the big decider among consumers this holiday.

The fragmentation of the tablet market creates a clutter that may ultimately benefit Apple, of all things. If consumers find the Kindle Fire and Nook HD lines to be just undifferentiated noise, then a smaller, cheap-enough iPad mini becomes the default decision.

The device market can only seriously fragment if consumers pay close enough attention to these claims of differentiation. If Apple comes to market with a reasonably priced mini iPad, then the main question for a consumer this holiday becomes: why not go with the iPad.