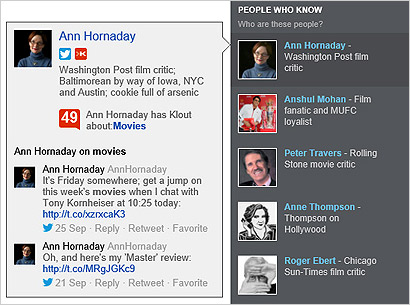 Microsoft made a "strategic investment" in Klout as part of a multiyear agreement in which its search engine Bing becomes one of the social site's "most significant" partners. That's how executives at the two companies described the deal announced Thursday.

It's unclear whether Microsoft made a financial investment in the company.

Klout data will appear in Bing's sidebar, such as a person's Klout score and topics they influence, in an effort to identify experts. On Klout, Bing highlights will serve up in the "moments" section of some profiles. It might include the number of times a person shows up as an expert in the "People Who Know" section of Bing’s sidebar or the volume and frequency of searches for that person, demonstrating how search becomes a signal of online influence.

As part of the partnership, Bing will provide other data to Klout. Search data has long been one of the missing signals in Klout's effort to recognize a person's influence on a specific topic. For example, influencers who have a Wikipedia account associated with their Klout profile will be rewarded for the frequency in searches on Bing, according to Joe Fernandez, Klout CEO.

"Just as Wikipedia articles can reflect a person's real-world influence, search results for a person signal accomplishments achieved beyond social networks and serve to influence others," Fernandez wrote in a blog post.