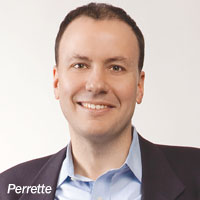 From Shark Week to TreeHugger, the Deadliest Catch to its latest investment in brain apps, Discovery wants to dominate the nonfiction universe, one shiny rectangle at a time.

Roughly a year after joining Discovery Communications, JB Perrette wants to talk about the future — not just next season, or even five years from now.

He’s ready to dish about how this company is growing beyond its cable-programming roots to become a “next-generation knowledge company.” He fills MEDIA’s Sarah Mahoney in on what’s next.

Back in May, Discovery bought Revision3, a major Internet video production company, with something like 23 million monthly unique viewers on 27 channels. What’s the goal?

Our mission is really about transforming the company. We call ourselves the No. 1 nonfiction media company, which is really about television. And we are trying to transform that to be the No. 1 media company across all screens. That’s the core of our mission. Our historical focus has been delivering great stories to all of our audiences, on 100 million multichannel homes in the U.S., or 1.7 billion homes globally. That’s a fantastic business, and will continue to be a great anchor business for us going forward.
But now the world is about a billion devices domestically, and 10 billion globally. And every single one of those devices is a glowing rectangle that is a video screen. Each one is an opportunity for us to deliver great experiences, and video is an incredibly powerful media. We want to lead not just in TV, but also across all those rectangles, around the world.

To do that, we have two core assets. One is, of course, our television content. We’ve got 13 channels domestically, and 149 globally. And that content, given that most of them  are supported by a dual revenue stream model, available across all screens.

But there are enormous amounts of new audiences, some of which overlap with ours, that are being developed in new platforms on the Internet, whether that is YouTube or Xbox or Amazon or Netflix.

So we want our content on all those platforms, but we also want to be part of new content, and that was the impetus behind the acquisition.

How is creating video different than what you do for TV?

It’s different in many ways. The formats are different. The length. The tone of the stories, in that they are much more personality driven. It’s more intimate, and more fan-based. The production costs are extremely different.

And it’s not just about producing the episodes. Once it’s produced, much of the work still has to be done, on sharing, on social, dealing with the comments regularly. Will that be daily? Weekly?

So Revision3, as a pioneer in that space, provides us with the capability and know-how to be able to produce for that audience, and why we’re excited to do more with them.

Is there a common thread?

Yes, the consistent thread is authenticity across the traditional TV portfolio, and new digital. Authentic, great storytelling is what makes us similar, even if the way we tell them is different. And it’s unique to us.

Can you give us an example of something Revision3 has done lately that you love?

It was just the 25th anniversary of Shark Week, and we got Internet personality Phil DeFranco to host the “25 Biggest Bites” countdown. He has an incredible following, and gets almost 30 million views a month, and is a big fan of Shark Week.

We said, “We’d love to integrate you into our programming.” In addition to hosting, he also did this very funny promotional video for it, spoofing the low budgets in online video versus TV.

Selectively, where there is a right fit, we will use online talent on TV. Another example, and something that was in the works even before the acquisition, is from howstuffworks.com, which is one of our sites. There is a very popular podcast, Stuff You Should Know, and it was working with the Science Channel on a pilot series, scheduled to air in January. That won’t work in every case — there’s plenty of digital talent that doesn’t want to do TV. So that won’t be our definition of success, but when it makes sense, great. It’s one more way the digital and TV world are coming together.

Discovery just announced that it was part of a $31.5 million investment group in Lumosity. What does that investment mean?

Our core strategy is around video, and this idea of being the No. 1 nonfiction media company across all screens. And we focus our core resources on that.
But we are also cognizant of the fact that Discovery is a brand that for 25 years has stood for igniting curiosity. That’s an incredible brand purpose, and it’s larger than just creating great television experiences. It’s showcased in the education business we have, and when you talk to people about what the brand attributes really mean — smart, curiosity. It has attributes that we think are much more powerful, and could form a next-generation knowledge company. I’m talking five or maybe 10 years down the road.

So we don’t want to dilute our core purpose now. But we do want to make some limited strategic bets and investments in what we think [is] very central to this knowledge space. Lumosity is a logical fit. It’s rooted in science, and they have great relationships with researchers. And they are bringing the elements and the fun and cool elements of games to the area of brain capacity and cognitive skills. When you think what people spend in time and money on physical fitness, we think there is a massive new world of opportunity for a focus more on brain fitness, and brain function.

Can you talk about your core demographics, and the incredible appetite young people seem to have for the kind of video you’re talking about?

There’s always been all this talk that professional video will go the way of the music business, or publishing. But if you look at behavior, and the way demand is growing, it’s not so. Time spent on video is growing. Distribution, the number of places where people can get it, is growing. Every rectangle that gets produced, from a Kindle Fire to a phone, these are all video-centric. That is a great sign for more video consumption over the years to come. Our need to tell great stories to meet those demands, not just for the next year but also for the next 10-plus years, is what gets us excited.

Do you have a demographic sweet spot? And how will it look in the future?

From an ad-sales standpoint, its 25 to 54 from our TV networks. Some channels are more male, some more female, but the portfolio, all in, is pretty well balanced between men and women. On the digital side, we will move the skew younger, not just in TV, but the overall portfolio. So what we can provide advertisers is [a] much broader demographic, bringing in 12 to 34 males and females. That’s going to allow us to innovate ad formats for our marketing and advertising partners.

What are the three most important trends facing your brand right now?

The video trend, of course. And the mobile trend, which is obviously an increasing share of audience. We’re trying to monetize that, just like everyone else. And you have the social trend. We have the second largest social footprint in cable, with over 65 million Facebook “likes,” and I think we are just beginning to scratch the surface on how you take this enormous network of promotional capability, new consumption patterns, new ways to surface content, and new ways for people to find content. If I know you like something and you and I are friends, well, here are the top 10 things my friends are watching. That sets up a whole new social electronic guide about what to watch. We’re excited about this.

If you were starting over today, what business would you want to be in?

This one! For 50 years or so, television was essentially the same. There was evolution, there was cable, color, HD. But then around 2000, things really changed. We don’t have all the answers, but I look it at it and say, lots of generations don’t get the opportunity to shape an industry. It is completely a new dawn and while we don’t know how it will all play out, if I were 18 or 22, I’d be part of this in a heartbeat.

I’m shocked. I thought you would say something like, “Mako Fisherman.”

I’m a big fan of Deadliest Catch. That’s the escapist male in me. If I weren’t doing this, I think a lot of men think, “Wouldn’t it be cool if I could go out in a boat and fight the elements in the North Pacific.” It might be less cool on the ship, but from my living room, it still seems pretty amazing.

What are your media habits?

I am a comedy fan, on TV and online. I like the Daily Show, and I’m a big Comedy Central fan. With digital stuff, I’m much more of a consumer than a publisher. I very rarely tweet, but I follow people. Same for Facebook. And I try a lot of stuff — apps and so forth, to stay current.

You have a three-year-old. Is he allowed to watch Shark Week?

No. He is not allowed Shark Week. But he can work the iPad. And he did take my phone off me at bedtime last night.