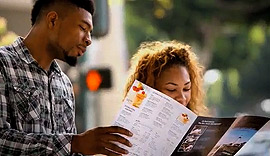 Seafood chain Red Lobster really does want people to see its (and its food) differently, unveiling a new menu that greatly expands its non-seafood and lower-price-point offerings.

“One of the ways that Red Lobster maintains our leadership position in the casual dining is by understanding the needs of our guests,” a Red Lobster representative tells Marketing Daily. “We understand that in addition to providing greater value, we need to broaden our menu to give more people more reasons to visit Red Lobster more often. This includes broadening our selection of both seafood and non-seafood options.”

Among the new menu items are “Maine Stays,” 15 dishes under $15 that include offerings such as bacon-wrapped shrimp, wood-grilled chicken with Portobello wine sauce and tilapia with roasted vegetables. The menu additions mean 60% of the chain’s menu will be under $15. (Previously, only 40% of the menu fell into that category.)

In addition, the chain is offering more non-seafood meals including Parmesan-crusted chicken Alfredo, wood-grilled pork chops and a blue cheese sirloin. After the changes, nearly one-quarter of the restaurant’s menu will be non-seafood offerings -- up from 8% on the previous menu.

The new menu is part of a companywide transition to update and broaden the brand’s appeal, including redesigning restaurant interiors and a relatively new ad campaign that showcases real employees of Red Lobster and the tagline “Sea Food Differently.”

Accordingly, Red Lobster will introduce the new menu items with a marketing campaign, including new national television advertisements as well as digital and social media executions. The new television ads depict chefs offering the new dishes via a food cart on the street to unsuspecting consumers. The consumers have positive reactions to the dishes, saying they need to look into trying Red Lobster again.

“We were excited to hit the streets to get unscripted feedback from real people as this menu revamp was in response to their needs,” the representative says. “The real people of Red Lobster best articulate what the brand is all about, and we’re confident that our guests will respond as positively to the new menu items as those featured in the new ‘man on the street’ advertisements.”

In addition to the revamped menu, Red Lobster has been remodeling the interiors of its restaurants creating what it calls a “Bar Harbor” model. So far, about half of the chain’s restaurants have been remodeled, and all of the North American restaurants are expected to be renovated by the end of 2014.

“We’ve made great investments in our menu and service over the last few years, and guests told us they thought our next opportunity was to refresh the look and feel inside and outside of our restaurants,” the representative says. “The remodeling of our restaurants represents our commitment to the communities where we operate and the local residents we serve.”