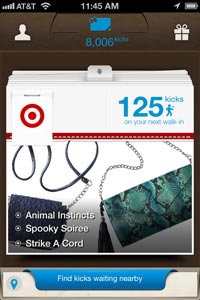 Shopkick on Wednesday unveiled a new version of its popular shopping app designed to assist users at home as much as in-store. To that end, the updated app encourages more browsing and discovery through curated “Lookbooks,” showcasing items from brands or retailers that have partnered with shopkick.

From the Lookbooks, people can save desired products to a “safebox” and get an on-screen reminder about those items when they walk into relevant stores. The emphasis on browsing is a major shift for shopkick, which launched two years ago as an in-store shopping tool that allows users to earn points, or “kicks,” toward rewards and discounts when they visit participating retailers.

Since then, the app has generated 10 million verified walk-ins to its 13 partner retailers including Best Buy, Macy's, Target and American Eagle Outfitters and over 1 billion views of in-app deals from its 4 million users.

What has been most surprising has been how much people have used shopkick outside stores. A Nielsen report on mobile shopping this summer showed that shopkick users on average spent 3 hours, 19 minutes with the app in June, far higher than any other top shopping apps.

Roeding further explains that active users are opening the app on average nine days each month -- six of them at home or work rather than in-store. “That was very interesting to us, because that’s not what shopkick was built for,” he said. “What we didn’t know was shopkick would be used outside stores to prepare for shopping trips.”

With that in mind, the app was revamped to cater to users’ actual shopping habits and make shopkick part of the entire purchase cycle. In what Roeding calls the “arc from the couch to the store,” the app becomes the next generation of the traditional Sunday circular or newspaper insert.

The difference is that shoppers are prompted about products they browsed once they get to the store, enhancing the chances of a purchase. To help make that connection, shopkick 3.0 has also added a 3D mapping feature that shows clusters of stores nearby where users can earn the most kicks. Sometimes, the number of available kicks will be doubled on a given day at several participating retailers. This feature would show the distance to a local shopping district with those stores and the number of kicks available.

The location functionality stemmed from shopkick’s finding that people tend to focus on multiple stores when shopping in a local area. “The more stores that have kicks, the more attractive that area becomes,” said Roeding. Kicks can be redeemed for things like store gift cards, Facebook credits, dining gift certificates, iTunes downloads, and even charitable donations.