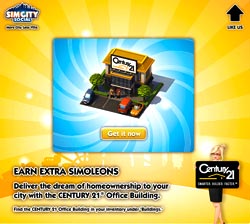 We live in the twenty-first century, and Century 21 is making sure its marketing programs are modern enough to reach the next generation of home buyers.

Beginning on Oct. 17, Century 21 is out with a three-week presence in EA’s SimCity social game on Facebook. As part of the promotion, players will be able to purchase and “build” a Century 21 building to earn the game’s virtual currency, as well as have the ability to perform so-called “friend or foe” actions on other players’ buildings (such as consulting with an agent or taking open house cookies) for additional points in the game. They’ll also be able to have the opportunity to earn energy boosts by watching an in-game Century 21 advertisement.

“It’s positioning our brand and our ‘smarter, bolder, faster agent’ for this game,” Bev Thorne, Century 21’s chief marketing officer, tells Marketing Daily. “And they’re doing exactly in the virtual world what consumers do in the real world.”

This is the second foray into the gaming world for Century 21, which last year appeared in ngmoco’s mobile game, We City. The jump into a Facebook-based game, however, gives Century 21 a much larger platform that is played by people between 25-34, or as Thorne calls them, “the next generation of home buyers.”

“There’s been phenomenal growth in Facebook,” she says “It’s where our consumers are. Marketing 101 says you want to be where your target consumers are.”

At the same time, Thorne knows a three-week presence in a social game is unlikely to translate into immediate new business for Century 21 or its agents, particularly in a still-soft housing market. But she hopes it will pay off as the economy and housing market improves.

“My hope is this next generation becomes more aware of what they might already be of Century 21, and I’m hoping to build an affinity for the brand,” she says. “I’m hoping their consciousness of a brand translates for that percentage of them into buying or selling a home in the real world.”