My Apple 'Genius' Just Disintermediated Himself 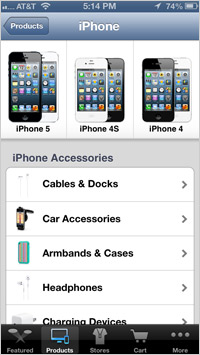 True story involving mobile self-checkout. So, recognizing a day after getting my iPhone 5 that my current phone car charger and car radio adapter are useless now, I started looking around for this infamous $30 Lightning to 30-Pin adapter Apple was requiring that all their brand-loyal, iPhone 5 upgraders purchase to maintain compatibility with legacy peripherals. Because the thing you really want to do with your best customers is force them to buy more from you. This may be the same corporate culture that has the audacity to put out a faster iteration of a new iPad the company just released 7 months ago.

I have to say that the Lightning connector controversy was never a big deal for me. After so many years with that increasing anachronistic 30-pin connector, I wasn’t going to begrudge Apple an update. Still, I think $30 for a dongle is outrageous, and Apple itself should have used this as a cue to offer some goodwill to its customer base. But follow that up with a 1.5 Version release of a $700 hunk of iPad hardware and the smell of brand arrogance begins to waft up.

Add to this that predictably at most Apple stores of late, the mobs both undermine the once-peerless experience and necessitate a small army of blue shirts that sometimes have the people skills of the other blue shirts that will go unnamed often working the big-box alternative down the way. I was forced to go into my local Apple store the other day because my online order for the adapter seemed stuck in limbo. I had heard the ridiculously overpriced devices had made their way to retail.

"I don’t know if we have them," said a small cluster of "geniuses" at the front door. "But they would be over there," pointing to a far corner. I don’t know if we are supposed to call the Apple salespeople "geniuses" or if that moniker goes only to the techies at the Bar. In any event, Apple seems now to employ mere greeters, because these blue space-wasters didn’t even bring me to the item.

When I did find the adapter, I turned to another blue shirt to make the purchase on their ever-ready portable point-of-sale for which Apple Stores are deservedly famous. He couldn’t connect. “I don’t know what it is," he said. "I just did this a second ago. I think the WiFi has been strange lately."

"How about if I just use my Apple Store app?" I offer. For a number of months now, the iOS app from Apple lets you perform a self-checkout on items simply by scanning the UPC code. So as quickly as I just described it, I opened the app and it already knew I was in a store -- although I was circumventing Apple’s Wifi and tapping the LTE network. While my "genius" was trying to figure out his POS, I was scanning the adapter, okaying the charge and getting a receipt on my phone.

For a brief moment I could see the poor guy’s face drop as he realized just how efficiently his own employer had just disintermediated him with its own mobile product.

"Oh, you have the 5?" he started gushing. "Do you like it? I am still waiting for mine." He then proceeded to ask how I like the AT&T LTE network, and felt relieved when I told him it was working exceptionally well for me even in weak coverage areas.

Let’s review -- because it seems to me there are a couple of critical things at play in this little scenario. First, my handheld technology was both more able and more efficient in getting me in and out of the crowded and loud Apple Store than the once-impressive POS tech the staff were carrying. But at the same time, a staff member at an Apple Store was dazzled by the technology I had in my hand when generally it is the customer who has been entranced by the tech the Apple minion is showing.

Mobile technology, married to the informed prosumer, has reversed the polarity at retail. Not only are the buyers more informed than the sellers, which has been the case for a while now. But the consumer can turn even an otherwise strong retail environment into a mere vending machine.

apple, mobile, retail
1 comment about "My Apple 'Genius' Just Disintermediated Himself ".
Check to receive email when comments are posted.
Next story loading