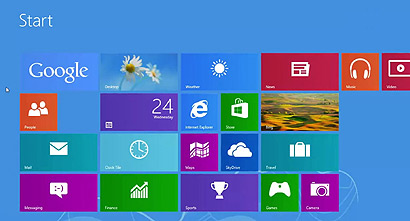 Microsoft Windows 8 debuted Friday, and Google took the opportunity to move Chrome into the spotlight. The Redmond, Wash. company did well to promote Internet Explorer and Bing in Win 8, but what does it mean for Google loyalists?

Acknowledging that Microsoft's Windows 8 will change search on multiple devices, from tablets to laptops, Google created a "Get Your Google Back" site and released a video Friday romancing, well, Win 8 lovers.

The video provides a visual on how Win 8 runs on the Chrome browser. A musical rendition of the Jackson 5's "Want You Back" accompanies the video. "Aw, baby, give me one more chance to show you I love you. Won't you please let me back in your heart? Oh darling, I was blind to let you go, but now since I see you in his arms."

Bing is the default engine on Win 8. The company launched video on how to use it. Jacob Steinberg tells us about the two versions of Win 8 and why Microsoft will need to launch an extensive marketing campaign by early next year to educate consumers on how to use it.

Gizmodo has already begun to provide tips on using Win 8, with a full list of shortcuts for the keyboard or live apps. Although the tiled desktop looks dramatically different than prior Windows operating systems, those familiar with a mobile phone touchscreen can easily adapt. And for those who can't, Microsoft offers a default button to make it look like the old Windows.