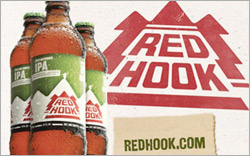 While most brands steer far clear of controversial issues, Seattle-based craft-beer brewer Redhook has stepped boldly into politics with an ad supporting Washington State’s Referendum 74, which would legalize same-sex marriage.

Running up to the Nov. 6 elections, Redhook is featuring the ad on news and sports media sites targeted within Washington.

Headline: “Getting married is so gay. It’s about time.” Copy underneath states: “Redhook supports equality on November 6.”

The ad is an extension of the brand’s “He’s Redhook” campaign, launched in April 2011.

The ads’ creative personifies the brand by using a Redhook bottle to express opinions through the copy – it’s implied that the beer is “a guy with thoughts and feelings,” explains Forrest Healy, creative director and principal in Frank Unlimited, the Seattle-based agency behind the campaign. Redhook’s core audience is males 25 to 35.

Sometimes, the opinions or sentiments expressed are just humorous (one past example: "Redhook totally thinks that blonde will give you her number.")

In addition, the campaign frequently takes on local issues. For instance, past ads have addressed a debate on whether the Seattle Mariners MLB team should move in its outfield fences, whether the Seattle City Council should vote to build a new NBA arena, Seattle’s notoriously bad traffic and Seattle’s “big dig,” an expensive underground tunnel.

Some of those have generated some controversy, but the gay marriage ad is the first to venture into an issue that’s become a political hot button on a national basis.

Is Redhook concerned that it might alienate some of the Pacific Northwest consumers who make up much of its customer base?

“We didn’t do any research specifically surrounding Referendum 74,” says Healy. “However, we do know that the Seattle area, where much of Redhook’s media dollars are spent, is largely liberal. As for taking a political stance, Redhook was aware of the potential risks and possible backlash. But this is a principle that we and they believed in. Doing the right thing is always worth the risk.”