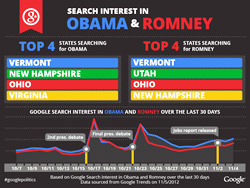 The Web lit up Tuesday with searches at news and social sites related to the elections. The push will likely have an impact on online advertising across the board. Many of the major sites, like Google, Bing, Facebook and Twitter, help Americans get the information they need to vote.

While Facebook uses its U.S. Politics page to provide information about Tuesday's election, Google analyzed nationwide search stats for interest in Barack Obama and Mitt Romney during the past 30 days leading up to the election.

Bing Elections 2012 provides live results, which serves up the percentage of votes and votes per states for each candidate. An interesting feature allows users to click a bar to shift the news to the right or the left. A nudge to the right provides more commentary on topics from select news agencies.

Twitter Government is tracking the number of tweets. As of 12:45 on Election Day, Obama's 71 outpaced Romney's 59 -- up from 66 and 56, respectively. The social site created a separate election page to highlight relevant political coverage and insight from voters.

For those wanting to know how many Americans voted, the Obama campaign created an app that allows people to tell friends on Facebook they have voted. Read the fine print. The app provides the Democratic Party with a great lead generation tool by collecting names, birth dates, photos, email addresses and more.

Several sites offer information on polling places, including Google, Obama's camp, and Romney's camp. On Google's Politics & Elections coverage page, voters can tap into money spent for ads per state and candidate, as well as live coverage on YouTube. An uploaded video from centralpavote shows a voting machine altering votes and provides a description of how Obama was initially selected, but the machine highlighted Romney.