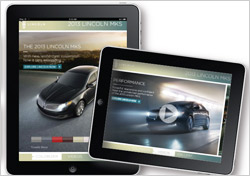 Rich media itself has become more widespread on the Rhythm network -- used in 43% of campaigns in the second and third quarter, compared to just 12% in the year-earlier period.

More than a third (36%) of rich media full-page ads used video, and 28% of campaigns used in-banner video in Q2 and Q3. Interaction rates for custom buttons in that ad format -- for getting more information or viewing photos or video, for example -- ranged from 2.2% to 10.8%.

For rich full-page ads, Rhythm says adding a mini video player boosts interaction rates for the units by 30%, to 3.8% to 12%.

Millennial CFO Michael Avon added that he expects spending on mobile rich media and video ads to pick up even more in the current quarter as entertainment and retail marketers pull out the stops to grab consumers’ attention during the key holiday shopping season.

Earlier this year, eMarketer projected spending on mobile rich media and banner advertising would increase to a third of total U.S. mobile ad dollars, or $861.7 million. Video will account for 5.8%, or $151 million, of the overall $2.6 billion total predicted, up from 4.7% last year.

The Rhythm data comes from ads served in the U.S. across iPhone, iPod Touch, iPad, Android and other devices in the second and third quarters. Its network spans more than 200 apps and sites owned by publishers such as NBC Universal, ABC, IAC, and Warner Bros. Brand advertisers on the platform include McDonald’s, Disney, Paramount, General Motors and Ford.