Remember the good old days when kids played outside in the fresh air for hours on end and had to be forced to come in? Then you’ve probably heard stories of your parents walking to school in the snow, uphill, when they were young.

To promote the “Unboxed: Adventures in Cardboard” exhibit, The Chicago Children's Museum launched Mister Imagine's Toy Store, a pop-up store in Chicago’s Wicker Park. This toy store, however, was nothing like a traditional toy store with games, videos, dolls and books. This toy store sold cardboard boxes, and nothing else.

Energy BBDO and Xi Chicago created the store to bring the beliefs of The Chicago Children's Museum to life. The museum believes that simple playtime that allows imaginations to run free is being threatened by the likes of TV, video games and the Internet. 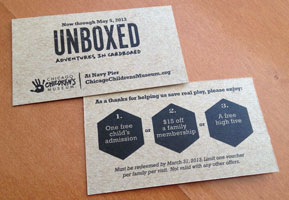 “Roughly 100-150 people walked through the front door of Mister Imagine’s Toy Store on opening day,” said Jonathan Linder, vice president, creative director at Energy BBDO. “It’s safe to say hundreds more peered through the windows and walked away with a WTF-look upon their face. We counted every one of those passers-by as a victory.”

Mister Imagine’s Toy Store was promoted like a small business, with guerilla posters, flyers in neighboring store windows and “Buy 1, Get 1 Free” coupons in coffee shops.

Each piece of cardboard found in the store was priced and labeled like a real toy and included information on the “Unboxed: Adventures in Cardboard” exhibit. Any purchases from the store included a voucher for a free admission to Chicago Children’s Museum or $15 off a yearly membership.

“Reactions were as varied as the toys coming out of the workshop,” said Natalie Taylor, associate creative director at Energy BBDO. “Some kids were disappointed, saying, ‘This isn’t a toy store! This is a box store!’ Some kids were confused, asking, ‘Where are all the toys?’ Some kids were delighted screaming, ‘I LOVE CARDBOARD!’ But, ultimately, every kid quickly saw the fun in the experience and dove into creating a toy that was uniquely their own."

According to Linder, “The only technology in the store is the augmented reality station, where kids can hold up their boxes with a QR code to the computer screen, and it will turn that box into a toy. Just a little help to get kids' imaginations going.”