The Whole Story: Women And Media 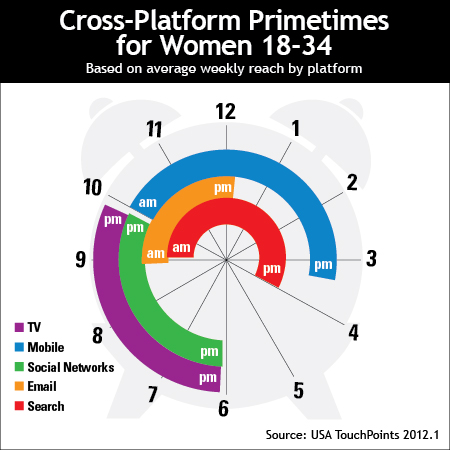 Every medium and behavior has a prime-time.  This USA TouchPoints analysis reveals the prime-times of five different media and communications platforms among women 18-34 to illustrate how these vary according to the nature of their use.

Various mediums have different prime times, so do audiences. This analysis would show differences for older women and across working and non-working women.

TV coincides with the prime time for the general population, with this group starting to tail off around 9.30. With TV so dominant by such a significant margin in our overall media lives it is only natural that prime time should occur within these hours.

Although the mobile phone is actively used for a range of functions throughout the day, mid-morning to mid-afternoon emerges as the peak usage hours.  Some of this may be related directly to work usage, but also to the fact that many women use mobile as their go-to personal communications deviceat work and when out— be it shopping, socializing, doing the school run etc. At other times, other media provide more competition for use.

We know from other analyses that email tends to peak in the morning for most audiences — largely driven by work-related usage — and this appears to hold true for women 18-34.  As with Mobile, the medium is not solely about work and remains well-used throughout the day, but the morning emerges as email’s prime time.

For Search, prime time is less marked, running as it does for almost the entirety of the working day.  With Search be heavily — but not exclusively — integrated to how many of us work today, this is not a surprising finding across this sample of all women 18-34, but a comparative analysis of working and non-working women in this and other age groups may well reveal significant differences.

Finally Social Networks, which reveals its prime time to encompass that of TV, running as it does from 6-10pm.  This may well be another media category that would show differences between working and non-working women.  We know women in general are heavy users of social media, and that they use it throughout the day.

However, many other women are unable to use social networks during the day — either due to other demands on their time or constraints placed on them by work-based technologies and networks.  Combine this with the rise in social media use in relation to TV content (Social TV) and we may have an indication of why prime time for Social Networks among this group almost mirrors that of TV.