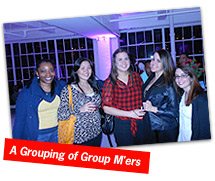 What happened to Halloween?!  The effects of Hurricane Sandy caused major devastation, loss and inconvenience - not to mention the fact that we skipped my favorite holiday.  But even I wasn't in the mood to celebrate this year, Halloween just felt so trivial in comparison to what we had all collectively gone through in the wake of this disaster.

So what is a company to do when their annual Halloween Party bash was scheduled in the midst of all of this?  Reschedule & Recreate, of course! 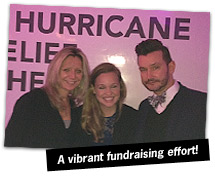 We'd never heard of Team Rubicon before, but learned a lot about them at the party. The non-government organization is made up of first responders, medical professionals and military veterans that deploy to global disaster zones in need of assistance. To date they've responded to disasters in Alabama, Haiti, Chile, Sudan, Pakistan and now to areas impacted by Hurricane Sandy! Learn more about the work they are doing here. 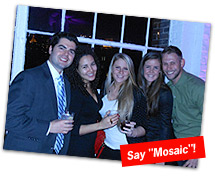 Now back to the party!

Surrounded by an amazing view of the city, attendees noshed on pizza, enjoyed a full open bar and listened to tunes by resident DJ  Agencies were in the house and talked to me about Vibrant's offerings which include a mosaic ad. I've never seen unit before, but it sounds like it is hard to miss --- this ad can include video, images, tweets and other social content -- and understandably is quite large.

Everyone at the party was in great spirits, I think we all needed a drink after last month (or at least I did)! The folks from Vibrant were especially thrilled to be helping out such a worthy cause and surely those in need will be happy beneficiaries of their generosity.