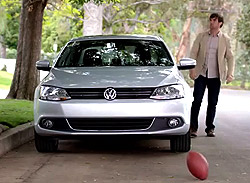 Volkswagen's challenge for the last decade has been maturing the brand for a new millennium. That sounds epic, but consider where the brand was in the 40 years prior, its fall from grace in the '80s and '90s, and its struggle to find a way back. Either the brand focused on too narrow a target for cars like GTI, or found itself in an irrelevant part of the market for all of its vehicles.

The salvation, with the help of AOR Deutsch L.A., was a way to tell the human story. That is, after all, why those DDB ads from the ’70's still work. It's not a coincidence that those ironical self-demeaning ads happened when the Beetle was in a lot of garages. "That was happening when our sales were close to 600,000 units in late ’60's," said Justin Osborne, general manager at the Herndon, Va.-based U.S. sales arm of the company.

Osborne and Douglas Van Praet, EVP, group planning director at Deutsch, held forth on VW and the agency's work on Wednesday at the 2012 Association of National Advertisers Creativity Conference. The former explained that the creative compass was oriented to the mandate that ads have to be more than pitches, and branding has to be more than sturm und drang. And if the brand is VW -- "the people's car" -- advertising must be especially imbued with a human story.

Parenthetically, Van Praet noted that the efficacy of Deutsch's work was boosted by marketing director Tim Mahoney's idea of doing an agency brief at one time for the entire year. "It's great because when I'm briefing my team, I'm giving an entire view of the brand for the entire year, and they go create," said Van Praet. That creative process, he said, goes on for four or five months, "with extensive back and forth."

Van Praet said the core challenge for the agency, when it picked up the account, was how to sell more cars without selling its soul. "We made a conscious decision to take a step up." The brand, after all, had no real position and resided in a purgatory between premium and mass market with no compelling reason to attract buyers. "People buy into your belief system. Our is the democratization of transportation," he said. The creative direction that "everyone deserves a better car" led to the tagline "That's the power of German engineering."

"It's artfully vague and has roots in something tangible," said Van Praet. The advertising dogma was the power of human stories simply told. "We have to speak to humans, not consumers. And storytelling is how humans communicate. For 99% of human evolution, people were hunter-gatherers. And culture began as stories were told around the fire."

Osborne said that those "human" principles -- creative directives, really -- led to advertising that worked regardless of the vehicle attribute it spotlighted. Thus, a spot that touts the solid "thunk" of the car door when it closes worked because it really told the story of the neighbor's kids who managed to lose all of their toys in the tree under which the car is parked. When the owner of the car closes the door, all of the toys -- and the family cat -- fall out.

"We each have our own story, and our cars fit in. We try to capture the range of emotion -- fun, sad, happy," said Van Praet.