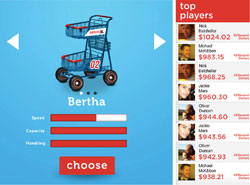 By tuning out East Coast chatter and conventional thinking, Digitaria creates digital designs that are as useful as they are beautiful.

Daiga Atvara talks fast, and from her cadence, you just know she is saying something important, so you press the phone hard to your ear, try to block out the Madison Avenue noise outside your window (and in a way, that's just what Madison Avenue is to Atvara -- noise) and listen. She’s excited, and passionately tells you about design, art, clients and culture, speaking about them in her Latvian accent as if they were one and the same, because to her they are. Although you can see Madison Avenue covered in snow and grime outside your window, if you listen closely enough, you’ll soon find yourself transported to the San Diego headquarters of Digitaria, the agency Atvara cofounded some 15 years ago, at which she serves as chief creative director.

In 1997, San Diego wasn’t the first place to come to mind when scouting locations in which to establish a world-class digital agency. In fact, it wouldn’t even make the list of usual suspects where New York, LA, San Francisco, Chicago and Boston reign supreme and whose markets have traditionally been flooded with fresh raw talent ready to claw its way to the top. But Atvara didn’t need claws — she is a towering talent — and it was only natural that when she cofounded Digitaria with current CEO Dan Khabie, the agency would ascend rapidly.

Until late 2010, Digitaria operated as an independent agency with an impressive client roster including GE, Sony and Under Armour. It was acquired by WPP's JWT that September, with the intention of keeping Digitaria independent, while allowing it to solidify its much-deserved reputation as a major force in the digital space.

Digitaria’s client roster reads like a who’s who of the business world, with clients from the NFL to Experian to Subway, working within a wide range of verticals ranging from sports to luxury to non-profits.

The agency’s blockbuster work this year, though, came from two clients that seem to stand in stark opposition to each other — at least where target audience is concerned — Petco and Rolex. The success of these two campaigns is further proof that the agency understands how to captivate any demographic, whether it’s tens of millions of pet owners, or the elite who can afford to drop five figures on a watch. For both, the agency’s carefully crafted efforts convey the same message: you need me.

“The definition of great design is making people care and teaching them something. Whatever makes sense to the people is what should matter,” says Atvara. And Digitaria did just that with the campaigns, creating beautiful experiences with which consumers could both identify and interact.

Of course no good design work, or any good work for that matter, gets done without a like-minded set of players all working towards a common goal. And that common goal is what unites Digitaria’s tight-knit community of employees. It may be a cliche, but it’s a cliche for good reason: At this company, your coworkers are really family — that is, family without the bickering and power plays.

“The employees do a lot together outside work — sports teams, outdoor days, movie screenings, Padres games, holiday parties, bike trips, poker night,” explains Sarah Kotlova, group account director, “some of them officially sanctioned and put together by the agency, some just organized by employees who like each other.”

But don’t let the fact that employees forge personal relationships and spend time with one another outside of work make you think the work doesn’t always come first.

“Digitaria is collaborative and people work very hard here when we’re under the gun, but they also know how to let go when things aren’t as tight,” Kotlova assures.

Maybe the Southern California sun is responsible for softening the edges of Digitaria’s work style, or perhaps more laid-back creatives are drawn to the area. No matter the reason, it’s clear that Digitaria’s San Diego location has shaped the company’s culture.

“What does it mean that we are from here?” Atvara ponders, “We have the West Coast mentality. We have this pioneering spirit of doing things in an exploratory way. San Diego forced us to be pioneers. The tech drive — there is something unknown here that hasn’t been discovered, yet that shapes us. It makes us think unconventionally — to survive and make us who we are.”
It’s that mentality that also shapes Digitaria on a more tangible level with regards to day-to-day operations.

“Digitaria is a very entrepreneurial company. Once you prove you know what you’re doing,” Kotlova says, “you get a lot of leeway and freedom. It’s a very SoCal place, people are laid back but coolly confident, and egomaniacs don’t last long here.”

Digitaria’s approach to storytelling also reflects their unconventional culture. For Atvara and team, campaigns should be about the consumer’s needs. And when you think about it, it seems logical that an agency would rather tell a story that consumers want to hear rather than forcing a narrative.

“We need to figure out what people want,” Atvara explains, “Making things people want is bigger than making people want things. We go from there and make relevance around it. Experience design will become more and more relevant.”

It’s not surprising that a different approach to campaigns arises from creating things people want. But, what people want the most, Digitaria has found, is great storytelling, even if that means thinking about the media and strategy later.

“We have a hard time working in the traditional sense: ‘here is our media strategy, banners, then storytelling,’” says Atvara, “For us, the media comes after the storytelling.”


The power of doing it all in-house

This approach to storytelling first isn’t hard to accomplish at Digitaria, given that all work is done in-house at this full service agency. “We produce almost everything in-house,” says Kotlova. “When that happens, inspiration can become a product itself — the idea is overseen to fruition by the very people who designed it. That’s very rare in the business. And it’s the biggest selling point for Digitaria. Our tech department can make the ideas our creative department comes up with a reality.”

Armed with one of the strongest in-house production teams in the industry, Digitaria is able to take on a wide range of clients, and even bring some back into the fold, as was the case when Petco recently approached the agency.

“Petco was one of Digitaria’s earliest clients, but we had parted several years ago,” says Kotlova, “The agency’s recent run of good creative, however, brought them back into our orbit, and our creative for Petco has earned all sorts of kudos for ‘bringing the fun back’ in their digital communications, via gameification and more playful digital work.”

“You can’t learn anything if you don’t ask why we are doing this and what does it mean,” Atvara says. “Petco made us think differently.”

“Rolex has been a blockbuster for us, and we’ve made great strides invigorating their digital creative, to the point that some of our digital has now crossed over into print advertising as well,” says Kotlova.

“Before it started working with Digitaria, Rolex thought digital marketing seemed too transitory for the luxury brand, but we’ve managed to bring the luxury of creative craft to the brand’s digital work — even in a simple thing like a banner ad, we have added working watches, which tell time,” says Kotlova.

Atvara’s thoughts on digital design come from a very practical standpoint, as always, and rely on people — the consumers — as the focus: “It’s almost product development thinking when you do design in digital. How do you want people to use it in the end? Even on the campaign level, it’s important to think that way.” The automatic watches’ iconic sweeping second hands dovetail nicely into Atvara’s views. Spark some creativity and nostalgia, an experience, if you will, but make it useful. Always make it useful.

Atvara puts it more simply: “What is the point of design? To make the usable product beautiful.”

“Our goal has been to create immersive experiences, like the banner ad and the Rolex YouTube channel, which is designed to be a brand experience, not just a collection of videos,” notes Kotlova.

With Digitaria’s triumphant foray into the luxury space, the agency proved that it could successfully tackle, and make profitable, any vertical it delved into.

One of Digitaria’s most widely celebrated campaigns this year was for Invisible Children. Remember Kony 2012? Digitaria made a huge splash with the initiative, and the award-winning lra Crisis Tracker was applauded throughout the industry.

After the world saw this campaign change lives, Digitaria realized it needed to hone in on its central branding, tightening and strengthening the message. Though the media uproar may have softened, Digitaria is still as invested as ever in the message.

“We continue working with Invisible Children and defining their work and narrowing who they are,” says Atvara. She notes that non-profit work also serves to empower the agency’s employees: “[Non-profit work is] more creative and also anchors [our staff] mentally to give a perspective of how incredibly powerful knowledge is — that our knowledge on how to sell shoes can make a real difference in the world. That’s empowering to our employees. They allow us to be more innovative. We pledge to have two non-profits a year. We are forced to be creative with very limited budgets.”

As for Digitaria’s future, Atvara has big plans. “This year has been about really innovative marketing work and entering luxury markets,” she says. Next year, though, will be about “diversifying in any sense. In all the verticals — luxury, auto. Another thing is we want to grow bigger in all aspects — to grow out of the space. We want insights into what that means in the markets. As a service, we want to diversify so we have a really diverse view of problems we solve. Really embracing different problems and bringing truth with technology.”

Consider this from Digitaria’s Web site: “The Digitaria brand was named after a star that nobody knew existed because its light reflected upon another star to make it appear shining and twinkling more brightly.”

Down on Madison Avenue the horns honk as the traffic picks up, and the ad men and women, bundled in wool and cashmere, file out of their offices and into buses, taxis and subways and vanish into   the East Coast ether. But look west. Conjure up some childhood wonder and imagination. Look at the light from the setting sun. Imagine that light is being reflected east by a team in San Diego, still hard at work, with entirely different dreams.

agency of the year, awards, design
1 comment about "Agency of the Year: Bronze, Design -- Digitaria".
Check to receive email when comments are posted.
Next story loading