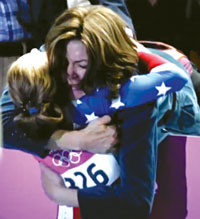 From making moms the star of the Olympics to its Southern Comfort everyman, Wieden + Kennedy continues to solve the industry’s problems, creating breakthrough + formulas

Can an agency institutionalize creativity? The consistent success of Wieden + Kennedy, the quirky Portland-based network that was long known as the “Just Do It” guys, certainly makes it seem possible, if not easy. To the agency’s long list of creative awards and acknowledgments, including its fourth straight Emmy for a Procter & Gamble commercial won earlier this year, the still-independent shop can now add MediaPost’s Creative Agency of 2012.

The work, as they say, speaks for itself. In 2012, Wieden found fresh angles for old clients (Nike, espn) and old brands (Southern Comfort, OldSpice), furthered the resuscitation of an American icon (Chrysler), forced a comfort food out of its comfort zone (Velveeta Mac and Cheese), and, perhaps most impressively, found the humanity in a once-faceless consumer packaged goods giant (Procter & Gamble).

So how do you enforce such a high level of creativity across eight offices in seven countries? One way is to work from a driving sense of insecurity, says Mark Fitzloff, partner and executive creative director.

“One way of summarizing the last 10 years of the Wieden + Kennedy story has been about diversifying our client base and moving beyond being known as the creative boutique in Portland that works with Nike,” he says.

“A lot of agencies will talk about spreading their financial risk and dependency by not having one client that pays the bills,” he continues, “we try to push that strategy onto our creative work.” Rather than let one or two clients serve as the agency’s creative showcases, Fitzloff strives to make them all award winners.

Of course, a need to prove yourself will only get you so far. Dave Luhr, partner and global chief operating officer, says Wieden’s network-wide creativity owes a lot to its business strategy, particularly its dedication to strictly organic growth. “What we’ve done in each of our markets is start from scratch, hire the very best people – people who reflect the values and cultures of this agency – and they help us start from scratch,” he says.

To seed the unique Wieden ingenuity, the agency places veteran creatives from established offices like Portland and New York in its new offices for long stretches of time. “We invest a lot of money to make sure we’re sending people to those offices, I don’t just mean for the week but I mean six months or a year,” Luhr says.

Whether it’s insecurity or business strategy or just something in the water coolers, Wieden remains one of the most consistently inventive agency networks in the business today. Never was this clearer than in 2012.

As the feel-good global event of the year, the 2012 London Summer Olympics provided a powerful platform for some of Wieden’s most effecting work. An Olympics commercial it made for Procter & Gamble — not a particular brand like Tide or Pampers, but the parent company itself — once again proved Wieden’s knack for coming up with the proverbial Big Idea.

When P&G decided it wanted to do some advertising around the games, it came to Wieden (with whom it already had a relationship thanks to Old Spice) “because we have a ton of sports marketing experience,” says Fitzloff. But sports and p&g aren’t exactly a natural fit.  “Our initial reaction was, you’ve got a problem in that you have no authentic connection to sports or to the performance of top international athletes,” Fitzloff says. “There’s nothing in your portfolio that would make me believe you’re somehow empowering these athletes.”

But while athletes aren’t a core target for P&G, moms are. “Every Olympic athlete has a mom, and P&G empowers moms to do their jobs,” Fitzloff says. “And can you imagine what an Olympian job it must be to raise an Olympian athlete?”

The resulting commercial from Wieden’s Portland office, “Best Job,” was a globe-spanning, tear-jerking tribute to moms of all cultures who make their children breakfast before dawn, drive them to swim practice, wash soiled uniforms, bandage sore feet, and, of course, cry when their kids triumph. The two-minute spot culminates in black copy against a white background: “The hardest best job in the world, is the best job in the world. Thank you, mom.” The logos for Tide, Pampers, Gillette and Duracell flash briefly on screen, followed by “P&G, proud sponsor of moms.” The commercial won Wieden its fourth straight Emmy. “Sometimes the simplest ideas can be the biggest ideas,” says Luhr of the insight that bolstered the commercial, “and that was a very big idea.”

Of course, Wieden’s signature client, Nike, is a more natural fit for the Olympics. But the Portland office was eager to find a fresh angle, which this year meant a focus not on elite athletes, but on amateurs. Nike has been doing a lot of advertising “that’s super aspirational — high testosterone stuff — about the larger-than-life, super athlete,” says Fitzloff. “We wanted to do the opposite. That meant celebrating not just the unsung amateur athlete, but even just redefining what this idea is of an aspirational athlete, or somebody that we should give hero worship to.”

Another effecting spot that got a lot of attention features the same voiceover over a single shot of an overweight teenage boy running along an empty country road at dawn.

Stretching its definition of social

While they haven’t been working together all that long, Old Spice is another client with which Wieden is now inexorably linked. And in 2012, the agency’s work for that brand continued to be weird and wonderful.

Having retired (for now) the actor Isaiah Mustafa, who won fame as Old Spice Guy for his subtle comedic touch and chiseled physique, Wieden focused instead on actor and muscleman Terry Crews. Furthering the brand’s reputation for bizarre but entertaining digital work, Wieden made a Web video called Muscle Music: A barely clothed Crews sits in a room full of ramshackle instruments, from a washtub drum to saxophones rigged with flamethrowers, with sensors attached to his muscles. With each muscle he flexes, another instrument plays. But the real attraction comes at the end, when Crews yells, “Now you try!” By pressing any key on his keyboard, the user can manipulate Crews’ muscles, and hence the music. The video captures the users’ creation, which he can then share on Vimeo.

And in one of the more impressive stunts in advertising this year, Wieden released an unusual help wanted ad for a social media strategist for the Old Spice account. In order to get the job, applicants had to complete one of 10 challenges: Get the most people to friend your mother or your father on Facebook in a single week; create the most reviewed recipe on allrecipes.com in a single week using cottage cheese; upload the most pictures of your armpit(s) to Instagram during the course of the challenge.

The stunt — which is, technically, not a stunt, since Fitzloff says they are in the process of actually hiring someone — not only won Wieden (and Old Spice) reams of publicity, but sparked controversy among social media “experts.”

“A lot of people on that side of the industry were really pissed off and said it demonstrated our utter lack of understanding of the category,” says Fitzloff. “But other people were saying, ‘Hold on, take a look at these challenges and think about what it would take to win them. If those aren’t the skill sets required of a really savvy manipulator of social media, then what is?’”
But perhaps no Wieden work was more controversial this past year than its commercial for Facebook, the first one ever made for the social media site. The 90-second spot that compared Facebook to tools that help people gather together — a chair, a doorbell, an airplane — was alternately hailed as genius and inscrutable. Gizmodo said, “Facebook’s first ad is its worst ad,’’ and Mashable turned out a spoof that mockingly compared Facebook to a cheese pizza and dinosaurs.

Fitzloff stands by the spot. “You’re not explaining what Facebook is,” he says, shooting down one of the more common explanations for the ad.  “You’re trying to reframe what people are already doing.” Because Facebook is free, “the risk is that it becomes trivial, like it’s a time waste.” The commercial was intended to reframe the Facebook experience in grander, philosophical terms. “If it sounded a little heavy and self-important, “Fitzloff says, “all that was fully intended.”

Both Amsterdam and Sao Paulo this year produced work that helped provide a global voice for Heineken, which had been lacking one. “Heineken was a very decentralized client in the past, so it was hard to build a disciplined voice for it,” Luhr says. Commercials from Amsterdam used an exuberant, cheesy lounge singer to portray the brand as fun and off-beat, characteristics that were reinforced by a Facebook campaign from Sao Paulo in which a Heineken employee blew up a balloon for every like his post received (grand total: 12,632 balloons).

The London office took the global Web-fueled obsession with cats that act like humans and turned it into a cinematic potboiler. In a 60-second spot for milk brand Cravendale, a regime of evil felines kidnaps and brainwashes milkmen. “Not on our watch, pussies,” says the voiceover. An accompanying hashtag, #catswiththumbs, continues to generate scores of daily tweets.

Proving that creativity is still relevant

And although Wieden lost Target in the u.s. this year – in spite of a fun, highly lauded commercial from the New York office that featured brightly dressed acrobats and dancers emerging from a hot air balloon to magically redecorate a city – it quickly erased the deficit by picking up superstore Tesco in the uk. “The best work of the year from London hasn’t been seen yet,” says Luhr. “Wait till you see the holiday campaign for Tesco.”

Of course, in an age of metrics and limited budgets, it’s worth asking whether creativity still matters, at least as much as it used to. Are clients still interested in agencies that win industry creative awards? Is creativity, for lack of a better term, out of fashion?

Fitzloff even concedes that Wieden’s focus on creativity is why it doesn’t have much in the way of mobile work to brag about. “Of all the media choices you can make, mobile is the one that seems the most aligned with utility rather than storytelling,” he says, “and we’re a storytelling agency. So we’re probably slightly hamstrung there.” (Though to be fair, “When will we see creativity in mobile” is a perennial question in the advertising business).

Nonetheless, Luhr believes that “creativity is still the Holy Grail in our business,” he says. “Clients want work that resonates, and our work has been really good at doing that.”

The proof, he says, is that during the economic downturn, Wieden’s business has actually added business every year.

“When everything is good, it’s hard to make a change because, hey, who’s arguing?” he says. “Well, everything hasn’t been up the past few years, and I think we’ve benefited from clients looking at their bottom line and saying, ‘Hey, I think we can do better.’”