Some campaigns are bound to bring out the green-eyed monster. Seven original thinkers tell OMMA about the year’s ads that made them say, “Wish I’d thought of that.” 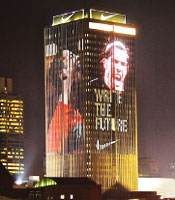 Wish I'd thought of…
Nike’s Tweetboard

In our day consumers have been exposed to many admirable advertising campaigns, including some that sparkle with inventiveness and wit. The challenge for today’s marketers, though, is not to broadcast and entertain but to engage.

To me, the most impressive branding program is Nike’s, which builds on spectacular advertising of years past while moving with authority into the frontiers of consumer engagement.
Nike has shifted out of traditional media into various engagement channels—using such imaginative techniques as design-your-own products.

Nike has steadily emphasized the theme of helping customers become better athletes. The company has used digital relationship tools, supplemented by selected advertising at events like the Olympics and March Madness. Nike spreads their media investment across all channels and forged partnerships with Facebook and Twitter. The company debuts ads that normally would have run on tv on YouTube and Facebook — and recently created a 30-story digital billboard displaying tweets from fans.

What’s the point? Nike gets into conversations with people who care about athletic activity. Its bloggers and Tweeters are not afraid to interject themselves into the conversation.
Best of all — completely in the spirit of the brand —  Nike speaks with an assertive point of view.

Selling Obama in 2012 wasn’t going to be easy. Incumbents can’t run on change or hope, they have to run on their records. And with a still-suffering economy and gridlock in Washington Obama didn’t have a lot of success or jobs to boast about.

But with one brilliant word, Obama made his case. His “Forward” slogan did what most slogans do not. It cut both ways. It said something positive about his brand while also saying something negative about the competition. That’s tough to do. Obama set up the election as a choice between going forward with him or going backwards with Romney. Romney countered with “Believe in America.” That slogan implies that Obama doesn’t believe in America. Obama spent four years as President and doesn’t believe in America? Makes no sense.

The final and not insignificant touch was incorporating Obama’s powerful visual from 2008 right into the slogan itself. He couldn’t say “hope” but that visual did. Pure genius. Wish I had thought of it.

A little over a year ago, Smartwater did something really fun. Using spokesperson Jennifer Aniston, who had appeared in videos and ads before, it made a viral video “Like A g6 (With Me and Jennifer Aniston) Smartwater Viral.” It kicks off with viral video kid Keenan Cahill lip-synching and then launches into a parody of making a viral video.  It received millions of hits and aside from the brilliance of getting her to endorse the product as the perfect spokesperson—wholesome, hot, sophisticated, but cool—it launched through the medium everyone loves seeing her in (video) first in a very cheeky and viral way.  It was a big success which they followed up with a few more videos, dedicated online channels/pages, print advertising, etc. I like that it started online and traveled to print.  It was very on-brand for them and beautifully executed.

What we do is very simple: Tell a story. Make a connection. Do it unexpectedly. This Expedia spot does it all. It tells the story of a father traveling to his daughter’s wedding: a lesbian wedding—a wedding that he doesn’t know if he approves of. The spot takes us on his journey, both physically and emotionally. It shares his dreams, his fears, his reality. We travel with him and feel his apprehension and trepidation. We empathize with him. And when he arrives at both his destination and his decision—we share in his relief, satisfaction, and joy.

We, as the viewers, have been allowed to walk a few miles in this man’s shoes. When the words “Find your understanding” appears on the screen we all feel like Expedia is more than just a travel company — it’s a journey company. And It doesn’t feel like a gimmick. This is storytelling at its finest. And I really wish I had done this campaign.

The Amnesty International ad titled “Independence,” done by tbwa France, is one of the most chilling and effective ads I’ve seen. Period. It very graphically depicts the abuses that wealth hides around the world. I don’t think u.s. audiences would ever stomach the realities of it but the sheer visceral reaction to the ad and the message cannot be hidden. The music and serenity of the film direction provide an almost eerie contrast to the violent visuals of one type of torture after another. And of course, implicate the viewer as complicit by simply watching and doing nothing. Very brave campaign.

The shock of it has probably affected those that have seen it and left a weird silence in its wake.

Recently an awful lot has been written about gamifying marketing actions. To get the attention of our target groups, we can’t count on merely paying for their attention by buying media space anymore, but should rather get their engagement by making them more involved with our marketing. It’s all about touching their hearts. Adding challenges and gaming techniques seems to be a good way — learned from positive psychology — to get consumers into this positive state of flow. I like Coke Zero’s ”Unlock the 007 in You,” related to the brand’s association with the new James Bond Skyfall franchise.

Instead of giving away tickets, Coke Zero created a challenge in a train station in Antwerp, in which ordinary travelers were required to go to a certain platform in 70 seconds. On their way, participants were confronted with different types of obstacles, like joggers, a woman with dogs on a leash, a girl calling them by name, and a man offering roses. When they arrived at the platform, they had to sing the famous James Bond tune to get their tickets for the movie.

Coke really paid a lot of attention to keeping its message consistent over different touch points: the cinema commercial was about an ordinary boy and girl in an unnamed city experiencing a James Bond moment culminating in sharing a Coke Zero.

In theatres, Coke allowed the audience to get a digital picture in a James Bond setting including Bond girls and props. As Coke Zero is a very male and macho brand, there’s a tight link between James Bond and  the brand’s dna making is consistent and authentic. The challenge in the little station game immediately went viral with now more than 8.5 million views in only a few weeks time.

I admire marketers willing to take smart risks to reap over-sized rewards. Especially with a simple iconic image like the Oreo.

Kraft Foods dolled up the popular Oreo by splashing it with an lgbt-friendly rainbow during June pride season, and wooed an enviable bounty of adoring fans and customers. This creative visual, so simple, low-cost and easy to execute, metastasized into a giant harvest of impressions and earned media that they could never afford to buy.

Did it rub some the wrong way? Did this suggest Kraft has taken sides in the so-called “culture wars?” Chattering heads sometimes painted it that way. However, for the century old food company, that modest risk made little difference compared with the way it resonated especially with younger audiences who are impressed when conventional brands think outside the box.