The Traveling In-Box: Mobile Email Opens Up 50% This Holiday 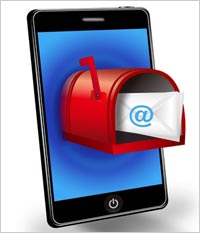 We are not sure which marketers -- and especially retailers -- failed to get the memo regarding mobile email open rates this year. But they probably paid a steep price in the big holiday shopping week around Thanksgiving. According to Knotice’s metering of over 3 million messages from retailers across categories, 44.75% of retail messages over the week containing Thanksgiving, Black Friday and Cyber Monday were opened on a smartphone or tablet -- up 50% from the rate last year at this time. Yeah -- that creaking sound you hear is the tipping point approaching, or already passing.

Smartphones are still the dominant force in email, with 28.22% of email going there during what Knotice is dubbing (because we really need another tag) Cyber Week, up from 22.18% last year. Not surprisingly, tablets are the emerging force, nearly doubling their 8.33% share from last year to 16.54% this year.

In terms of timing, the shopping rituals seem to even out mobile and tablet usage. While previously Knotice had seen declines in device opens during times when people tend to be in front of their desktops and spikes during evening and early morning hours, the Cyber Week opens were much more evenly distributed. For smartphones in particular, marketers need to take this as a good sign that their users are in fact out and about and checking emails. The opportunities for using the medium for timed offers and to put tools like coupons in hand clearly are there for the taking.

The actual click activity within the opened emails continues to map against the relative screen sizes involved, with click-through rates of 9.98% on mobile, 10.08% on tablets and 17.82% on desktop. It is worth noting how much tablet click-throughs are closer to mobile than they are to desktop. This suggests that as much as we jabber about tablets replacing desktop/laptop experiences, the two are not the same. There remains a greater reticence to click through on links in an email on a tablet than on the desktop. That means that email messages aimed at both platforms need to include either clearer calls to action that motivate the click or more content that is usable in the initial message itself.

Personal note to Santa. For my part, I would appreciate it if retailers trying to send me a coupon via email would either embed the scannable code in the message body or click through to a landing page that has a barcode formatted for the phone. This little elf gets his green tights in a bunch when he is pinching and zooming on a touchscreen with a pile of packages in his arms. Not complaining, big guy. I know you are busy jetting around on that sleigh with the heated seats and on-demand cocoa. But some of us down here doing the grunt work could use a break.

"Smartphone with Mail Box from Shutterstock"