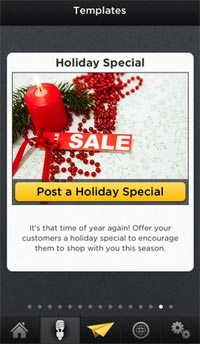 If the design of the messaging app for very small businesses (oh, let’s call them VSBs) Glyder looks and feels a bit like a mobile game construction app, that is not coincidental. Former Zynga designer Alan Wells is a co-founder, along with OpenTable co-founder Glenn Allen. This very cool idea lets the smallest of businesses craft a rich media message on their iPhone out of a series of templates (or from scratch) and then sends it out via a number of communications channels, from Facebook and Twitter to email, Pinterest and many others.

Like a freemium game, much that is of the most value here -- templates and wider distribution options -- is available via simple and cheap 99-cent in-app premium upgrade. The aim here is to target the smallest of businesses -- mainly those with less than five employees -- and to let the owner create deals, notices, specials, or just customer contact on the fly. Given the nature of many service industries, a lot of these folks aren’t in front of a PC much of the day. They are out on calls and making money.

The app is designed to fit the VSB lifestyle. The emphasis of the app is on polished designs. But one can imagine that its greatest strength for local businesses is straightforward customer relations. The back end of the system takes a rich media message and renders it for many of the major social outlets. Essentially, it can allow a local businessperson to use an Instagram-like messaging vehicle across a multitude of mobile and desktop networks.

One function of the app is Passbook integration. You can send people deals they can use more easily.

This novel approach to local, small business marketing is intriguing because it addresses some longstanding weaknesses in digital marketing’s perpetual struggle to get the mom and pops on board. Most self-marketing service operators do not have the time to learn and monitor an online self-serve system, let alone master the methods of keyword bidding and Web site updating. This approach at least puts familiar tools on a familiar device and leverages familiar social channels. Sure, it requires some Facebook, Twitter, Pinterest, and email network presence already to be established. But if those platforms are already in place, it makes updating and leveraging them all the more likely.

At a Mobile Insider Summit last year, a small business owner made the excellent point that every marketing spend he makes is coming out of his own pocket. Whatever share of revenue he devotes to marketing is less that he actually brings home. The same is true for time.