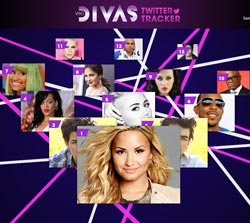 A Twitter Tracker tool created by the digital experts supporting "VH1 Divas" scheduled to air live on Sunday should stir up some social conversation around the show. The tool will show viewers the celebrity Twitter buzz on desktop and mobile, allowing them to click through for more information.

The site will show the popularity based on the number of retweets. Another tool allows viewers to track and view photos in real-time as the show airs. Fans determine the way photos get organized, rather than VH1's editorial group, according to Jonathan Mallow, executive producer for VH1 Digital.

"It's about consuming content while the show runs, but the social universe determines the order."

For VH1, it's about bringing the fans closer to the artists and talent they love. Last year, VH1 live streamed a photo shoot around a show that had come back from hiatus with two new cast members. Fans opt-in to receive the content.

"These types of campaigns give us get a better sense of what resonates with the audience," said Dan Sacher, VP of digital of VH1. "It can help us better entertain the audience."

VH1 broke records in social engagement surrounding a show called "Love & Hip Hop," which ranked No. 1 as the social show of the summer by Trendrr.

While VH1's digital team builds the content, the network's marketing group monitors what's trending and buying keywords that match with the performance that occurs on live shows, such as "Divas." It completes the circle. Rather than lead people back to a page, the strategy matches keywords and content.

The VH1 Red Carpet Web cast preshow on VH1.com will debut the Twitter tracker hosted by some of the other network's talents.