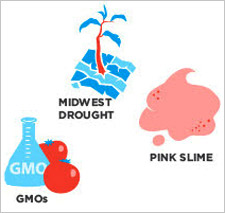 In fact, 81% of Americans deemed coverage of food products and the companies that make them to be of equal or greater importance than other news stories this year, according to the tenth annual Food News Study from Hunter Public Relations, which specializes in marketing communications for the food and beverage industry.

“Americans clearly understand the relationship between food and health, and are noticing and seeking out information more than ever before,” sums up Samara Mormar, SVP for insights and strategy for Hunter.

This year, the expanded survey (statistically representative of U.S. adults 18 and older) was conducted by market research and consulting firm Digital Research, Inc. (DRI). Based on its daily monitoring of food news, Hunter identified the 20 stories that drew the most coverage, then had a panel of food industry experts narrow those down to 10. Consumers were surveyed on their awareness of the stories, and those who were aware of them were asked to rank each as to its importance and also to rank the 10 in order of importance.

The Top Food Stories ranking resulting reflects the stories that were ranked within the top three by the largest percentages of consumers. (In many cases, levels of awareness did not equate with perceived levels of importance.) Consumers who were aware of the stories were also asked questions about whether the various news developments had affected their food shopping and consumption behaviors.

A summary of the Top Food Stories and their impacts:

#1:  Midwest drought/food price hikes:  Not surprisingly, the severe drought in the Midwest -- which sent the prices of food staples including meat, produce and shelf-stable products soaring, with major domestic and global implications -- was the year’s top food story. Among the 49% who were aware of this story, 82% ranked it within the top three (and 43% ranked it as #1).

This development ranked third among the 10 stories in terms of levels of impact on actual behavior (after stories about Omega-3s and “pink slime” -- see below). A range of 35% to 41% of those aware of the drought/higher prices story reported that it had changed their behavior in some way (the way they ate, grocery shopped or their general behavior). And among these, 48% reported using more coupons, 33% said it spurred them to purchase more canned fruits and vegetables, and 32% said they bought less fresh produce.

#2:  “Pink slime" in beef products:  The graphic “pink slime” moniker and accompanying photos of the government-approved beef-products filler known in the meat industry as “lean finely textured beef” struck a nerve with the public -- causing some food retailers to drop products containing the filler, closures of many plants using this process, and pricing ramifications for beef products, among other fallout.

Sixty-one percent of respondents were aware of this story, 66% of those ranked it in the top three, and 25% ranked it #1. Thirty-eight percent to 43% of those who were aware of the story said it had caused them to change behavior in some way. Of those, 53% said they had purchased/consumed more chicken as a result; half said they had purchased a higher grade of beef; and about a third reported purchasing/consuming more fish (31%) or pork (27%).

#3:  Genetically Modified Organisms (GMOs):  While the California ballot proposition (Prop 37) that would have made labeling of products containing GMOs mandatory was ultimately defeated, it generated a lot of media coverage of this polarizing issue.

The GMOs story ranked fourth-lowest in awareness level (28%), but it had not previously made Hunter’s top 10 stories lists. Furthermore, 68% of those who were aware of it ranked it in the top three in importance (and 26% ranked it as #1).

It also ranked fourth in terms of impacts on behavior, with 35% to 38% of those who were aware of it reporting some type of change in behavior. Of those, 77% reported that it caused them to check labels to determine if food contained GMOs, 54% said it prompted them to do more research about GMOs, and 46% said they stopped buying foods with GMOs.

#4:  Healthier school lunches:  Nearly two-thirds (61%) were aware of Congress’s approval in early 2012 of calorie limits and other new nutritional standards for school lunches, and 65% of those ranked this among the top three stories (23% ranked it #1).

#5:  Omega-3s:  One-quarter (26%) said they were aware of a study published in the Journal of the American Medical Association that reported that Omega-3 fatty acids might not, after all, actually help prevent heart disease, Alzheimer’s, depression and other conditions. But more than half who were aware of this story ranked it among the top three food stories, while 18% ranked it as #1.

#6:  “Let’s Move!”:  Half were aware of First Lady Michelle Obama’s initiative, in partnership with corporations, schools and organizations, to help end childhood obesity in the U.S., and 49% ranked it among the top three food stories (14% ranked it #1).

This story ranked seventh in terms of impacts on behavior, with 26% to 31% of those who were aware of it reporting some type of behavior change. Among these, 48% said they had encouraged their kids/families to exercise more; 40% said they had included more active play/events in their families’ routines; and 26% said they had altered their kids’ diets to include healthier foods.

#7:  Chick-fil-A gay marriage controversy:  This pulled the highest awareness level, with 70% saying they knew about the controversy generated by a Chick-fil-A executive’s public statement opposing same-sex marriage. Just under half (46%) ranked it in the top three, and 17% ranked it #1.

However, it ranked ninth in terms of impacts on behavior, with just 12% to 19% of those who were aware of it reporting some type of behavior change. Among these, 47% said they had discussed the topic with others; 27% said they had shared their opinions about it on social media; 38% said they had stopped eating at Chick-fil-A; 25% said they ate more often at the chain; and 17% said they had researched the positions of other fast-food chains on the issue of gay marriage/rights.

#8:  McDonald’s calorie posting initiative: Fifty-four percent were aware that McDonald’s moved to posting the calorie counts of food/beverage items on in-store and drive-through menus, and 46% ranked this among the top three stories (11% ranked it #1).

#10:  Food photography and social media: The popularity of new, visually focused sites and apps, like Pinterest and Instagram, created a wave of amateur food photographers eager to post their work online. Just 6% of respondents expressed awareness of this story, and 29% aware of it ranked it in the top three (5% ranked it #1). However, it ranked fifth in terms of behavior impacts, with between 34% and 40% reporting some type of change in behavior.

*80% of respondents agreed that people need to take responsibility for what they eat (the highest level of agreement for any question in the survey).

*35% said they believe that the U.S. has a serious food safety issue.

*More than 30% said they believe that there is too much conflicting information about food and nutrition to make healthy choices.

*Among overall priorities, food ranked solidly in the middle, beating out both sleep and work, but falling well below the importance of family and love.

More detail on the study -- including the actual numbers of respondents expressing awareness of each of the stories -- can be found on Hunter’s site, along with a contact to request the full study summary report.