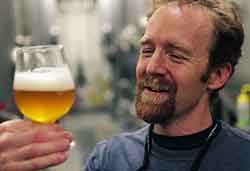 Sierra Nevada Brewing has a foot in a lot of markets, and since it competes in the niche craft beer arena it doesn't need to do much in the way of advertising. But that doesn't mean it doesn't need to update its Web site now and then. And now is good, since there hasn't been a "then" in a decade.

The timing is also good because the brand has a new brewery in North Carolina to bulk up in the East Coast market. The Chico, Calif.-based brewer tapped the Seattle office of Digital Kitchen to develop a new site that includes a film about the brand. The four-minute documentary-style film (voiceover by founder Ken Grossman) details the 30-year-old brand's position, values, and history. The effort also includes in-store elements.

"We have been fortunate not to have to rely on ads," says Ryan Arnold, communications manager for Sierra Nevada, adding that the brand does have a presence at beer festivals and other outdoor events.

Eric Oldrin, managing director of Digital Kitchen Seattle, tells Marketing Daily that the brand needed a Web-based forum for its brand story. "When they started in 30 years ago, they were one of the first craft beers; now there are thousands." He notes that the brewer began expanding into more seasonal beers and variants a few years ago, which has helped grow sales. "Our research showed that people see Sierra as synonymous with quality and consistency," he says. "But that sense of perfection can feel stodgy. We wanted to make sure we helped the voice reflect the daring part of what they are doing."

Arnold says the brand does particularly well in California, especially in the northern region of the state, and has distribution in all 50 states. Though the brand has strong recognition, it has no designs on becoming a major player as it craft is about 6% of the total beer market. The brand is getting the word out about the site via social channels, says Arnold. "When we flipped on the switch we shared it on our Facebook, Twitter and Instagram accounts and have been fortunate to have industry and online publications interested."

Oldrin says the brand doesn't need much more than that."They do all their advertising in a 12-ounce bottle."