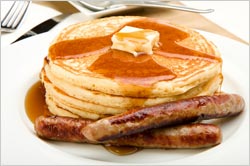 Sales of CPG breakfast foods remained markedly strong throughout the recession, and consumers’ hunger for tastier and healthier options should present ample opportunities to keep them rolling, according to a new report from Mintel.

At-home breakfast foods’ cost and convenience advantages have helped drive the category. However, perceptions about taste and quality may be holding back some growth.

Fully 57% of consumers who eat any breakfast foods during the week say that they would be willing to spend more on better-quality prepackaged breakfast foods, shows Mintel’s consumer research.

“While a frugal mindset is keeping many people from regularly eating out, aggressive breakfast offerings at restaurants have been attracting many customers” -- making restaurants a significant, continuing competitive threat for food manufacturers and retailers, points out Mintel food analyst Carla Dobre-Chastain.

Conclusion: CPG makers and retailers will need to “strike a balance between price and quality” in order to stay at the top of the market, she says.

Continuing to innovate healthier yet tasty options is also critical for breakfast-food makers.

The demand for healthier options is most pronounced in regard to highly popular breakfast foods that aren’t necessarily traditionally equated with being the healthiest choices.

Forty-five percent of respondents report eating pancakes for breakfast, 40% frozen waffles and 33% packaged sausages -- and 52%, 48% and 37% of total respondents report that they would like to see healthier waffle, pancake mix and sausage options, respectively, in stores.

"Breakfast of Pancakes and Sausages photo from Shutterstock"