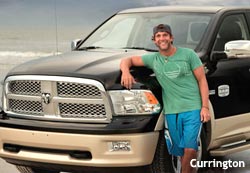 Chrysler truck division Ram has spent a year in the country. The automaker, in February, began promoting five top country musicians -- Zac Brown Band, Kellie Pickler, Easton Corbin, Brantley Gilbert and Billy Currington -- under a digital, performance, promotional and partnership-based program called “2012 Road to the Ram Jam.” The campaign, which puts both Ram Truck and the artists in the spotlight, is also anchored to Ram’s ranch on Yahoo, “Ram Country on Yahoo! Music.”

The site’s digital flatbed is loaded with video content, and a promotion tied to the year-long program dangling collectible posters, old-school vinyl records, and free music downloads. The grand prize was a chance to enter to win a trip for two to the program’s culminating event, which happens next week: the invitation-only “Ram Jam” concert on Dec. 29 at Nashville’s Marathon Music Works. As part of the artists’ support by Ram, they each got to drive a Ram Laramie Longhorn pickup for a year. Marketing Daily talks country with Marissa Hunter, chief of Ram Truck advertising. [Part II of the interview on Monday]

A: That is a marquis program for us, and we have been enhancing our engagement through the site -- so yes, we will move forward with it. It's been quite interesting and a great testament to our presence in the space that they have exclusive rights to stream this concert. They are really savvy in country music and also in their ability to engage. As part of our relationship and arrangement with them, we did a handful of live sessions this year, too.

Q: How has the whole program worked out?

A: We have seen increased traffic to the site over the year, an increase from the first year [2011]. The live concert series was an enhancement to that relationship this year and drove a big increase in site traffic. So we are having conversations now on what we can do in 2013 to amplify the reach and engagement, but music content will remain the core.

Q: How about KPI’s for “Road to Ram Jam.” What have you seen?

A: We are very happy with that. This is the first time we have pulled together something this original and of this magnitude. It's new territory for us. On just a conversational basis, it turned out to be a unique way to build brand awareness in the country music. We saw a big spike in brand visibility metrics when we promoted Ram on the artists' own fan pages, on social media and through Ram Country [on Yahoo]. We saw 850,000 Web page visits during the program, and over 600,00 entries to our sweepstakes, and we saw about 5% increase in the number of entrants who opted-in to learn more about our brand. That's a big jump because typically, we would see a 1% to 3% increase in opt-ins. We garnered north of 11 million social media impressions, and then we had specific Ram Jam landing pages on all artist Web sites and those pages saw north of 40,00 visits, so we are excited even just with the pure numbers. The other thing is the fact that artists themselves responded very favorably to it, and were happy with the creative materials.