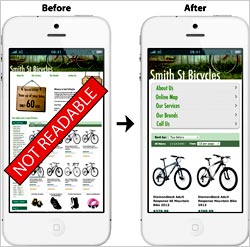 Google has made something of a crusade of getting companies to create mobile-friendly extensions of their sites through its GoMo Initiative. Powering that effort for Google is Duda Mobile, which provides businesses with a low-cost service for optimizing their sites for mobile screens.

Among startups competing with Duda Mobile is bMobilized, which offers a DIY platform allowing small and medium-sized businesses to convert their sites to HTML5, optimized for any mobile device and operating system. The company, which has moved headquarters to New York from Oslo, on Friday announced raising $2.5 million from investors Alliance Venture, Investinor and Alden AS.

The Norway-based firms had previously put $1.5 million into bMobilized, which said it will use the new funding to help develop new feature-rich functions for its platform, add an API (application programming interface) for larger partners, a white-label solution and pursue overseas market expansion.

The company claims that its Automatic Content Identification technology -- for which it charges $9 a month, including set-up and maintenance -- can create a mobilized version of a Web site in 30 seconds. The platform uses 300 algorithms to analyze and detect the various menus, content and assets on a site to carry out the conversion to HTML5.

The company also says its technology offers more than 30 customizable features to enhance mobile interaction, including "click-to-call," "click-to-map" and social-sharing buttons, as well as a product promo window on home page. Businesses can also use the tool to promote their services via Google AdWords, QR Codes, and in-app ads.

Fueled by the growing shift of companies and consumers to the mobile Web, bMobilized has seen its customer base increase 400% since May. According to BIA/Kelsey’s Local Commerce Monitor report for the third quarter, only 14.7% of SMBs surveyed had a mobile Web.