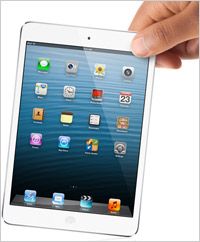 With millions of iPhones, iPads, Kindle Fires and Galaxy S III handsets given as gifts, more iOS and Android devices were again activated on Christmas Day in 2012 than any other day of the year.

Device activations on Dec. 25 jumped to 17.4 million, a 332% increase over the daily average of 4 million for the first 20 days of December, according to new data from mobile ad and analytics firm Flurry. With more than 260,000 apps using its analytics software, Flurry says it detects over 90% of all new iOS and Android device activations each day.

The 17.4 million activations this year far surpassed last year’s Christmas Day record of 6.8 million, which was up 300% from the December baseline in 2011. Another big change for last year was that tablet activations slightly outpaced those for smartphones, 51% to 49%. Last year, smartphone activations outnumbered those for tablets by a 4:1 ratio.

“The big winners were Apple iPads, Apple iPad Minis and Amazon Kindle Fire HD 7” tablets,” stated a Flurry blog post today. “In particular, Amazon had a very strong performance in the tablet category, growing by several thousand percent over its baseline of tablet activations over the earlier part of December.”

In addition to a wider selection of tablets to choose from, at lower prices, the shift toward tablet activations this year also underscores the higher penetration of smartphones, which have passed the 50% mark in the U.S. New findings from the Pew Research Center today estimate a quarter of Americans 16 and over now own tablets, and a third have a tablet or a dedicated e-reader like a Kindle or a Nook.

Flurry found the number of app downloads on Christmas day more than doubled to 328 million from the December average of 155 million. Flurry expects app downloads will remain high through New Year’s Day, with the week’s total on track to surpass 1.5 billion, and possibly hit 2 billion for the first time ever.