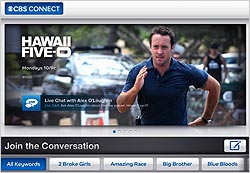 CBS is expanding a second-screen iPad app to include “CSI:” and “Hawaii Five-O” after an initial launch with “NCIS: Los Angeles.” Plans call for expansion to other series.

The second-screen opportunity falls under the umbrella of the expansion of CBS Connect to an iPad app. Launched last spring online, CBS Connect provides a single home for social-media conversation about CBS shows across multiple dayparts.

CBS Connect allows viewers to interact with one another and includes tweets from talent.

Second-screen offerings, which can be synced with what’s happening on-air, are assembled by the writers and producers of particular shows. Content might include behind-the-scenes video, additional character information, as well as a chance to participate in polls and answer trivia questions.

The content can be accessible during a live broadcast, also via on-demand and DVR-enabled viewing.

The “NCIS: Los Angeles” second-screen opportunity debuted with the show’s season premiere in September and Marc DeBevoise, general manager at CBS Interactive, stated that usage levels have “validated our multi-platform strategy” and an aim is to allow viewers to “dive deeper” into episodes.