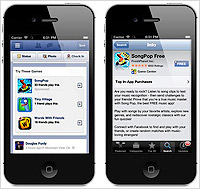 Less than a year after the world’s largest online social network introduced formats for devices, more than one in five dollars spent in Facebook advertising is now going to mobile ads. According to analysis of sample advertisers using its social ad platform Kenshoo finds that 20.3% of ad spend on Facebook is for ads that are being delivered on devices, while 79.7% of the spend is still going to Desktop views.

Kenshoo analyzed over 2 million clicks and conversions in its Kenshoo social ad platform during November and December 2012. The research embraced both phones and tablets.

One of the reasons that a fifth of spend is going to mobile is premium pricing. Kenshoo also founds that mobile ads are selling at a 70% price premium over desktop ads. “There are a number of factors related to the premium for mobile ads over desktop,” Todd Herrold, Senior Director, Product Marketing, Kenshoo tells Mobile Marketing Daily. Ad supply on the mobile platform is naturally restricted by screen real estate as well as the social network’s own policy about inserting ads here. “Facebook has been very cautious about the balance between organic and paid content in this environment,” he says.

The premium pricing can be worthwhile when the marketer goals are well aligned with the platform. “Advertisers who are targeting mobile specifically and tailoring their goals and messages to the mindset of the mobile user are finding it a very effective medium,” Herrold says. Cost per click on Facebook desktop ads are averaging $.81 in Kenshoo’s survey of campaigns, while mobile CPC is $1.38.

Marketers still are getting used to managing the cross-platform environment Facebook is offering them, however. “Of course in some cases, targeting overlays can lead to higher CPCs but it appears that the biggest driver of CPC is related to targeting and optimization for mobile placements specifically,” he says. “Many advertisers set up campaigns targeted to ‘all’ placements or what I call ‘run of device’ campaigns, rather than breaking their mobile and desktop placements out separately. Frequently, the lack of placement targeting and mobile customization/optimization can result in higher CPC and lower performance.”

Interestingly, Android proved to be Facebook’s most lucrative smartphone platform, responsible for 71% of marketing spend on smartphones. Conventional wisdom often holds that Android may enjoy much higher device penetration levels than iOS, usage, monetization and conversion levels for the Google platform tend to be lower than its main rival in the space.

Conversely, Apple’s dominance of the tablet ecosystem on Facebook is almost complete, with 97% of Facebook ad spend on tablets.