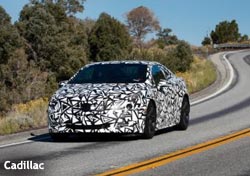 General Motors’ largest division, Chevrolet, is launching what the automaker calls its first global marketing platform, under the tagline “Find New Roads.” The effort will be elaborated in all global markets in which Chevrolet sells vehicles.

Alan Batey, VP both of GM U.S. sales and service and global marketing, who took over as interim director of global marketing when Joel Ewanick departed in late July, says the time is right to do this because the automaker has five global vehicles now -- Spark, Cruze, Volt, Malibu and Sonic -- with 20 global launches this year as well worldwide.

Chevrolet’s approach to marketing and the retail experience is already aligning with this new global vision, says Batey. Last year, under Ewanick, Chevrolet -- after an agency review -- tapped Detroit-based Commonwealth. The automaker also says it has launched a program to train dealership personnel worldwide.

Batey tells Marketing Daily that the impetus to create the new marketing direction was Chevrolet's growth globally in its 140 or so markets. The automaker says that since the 2009 launch of its first global vehicle -- the Chevrolet Cruze mid-size sedan -- the brand’s sales have grown about 38%, and that it is the fastest-growing global auto brand.

"If you go back 10 years, we had 27% of sales outside the U.S. -- today we had about 65% sold outside the U.S.," he says, adding that the new platform also has the role of getting the message to agencies and employees worldwide that Chevrolet's new mantra is about the "spirit of ingenuity." "It's a dynamic and different rallying cry for the organization." He says the new tagline works well globally because "it's simple and flexible and translates well."

Batey also asserts that the new global tag doesn't imply that Chevrolet will blanket markets with uniform creative. "I have worked in eight countries around the world, and I can tell you it is the local way of expressing things that brings creative alive -- so we want a global platform, but at the same time it's local customer insights that allow us to break through. The consistency is around the platform and position. At the end of the day there will be work to be done on how it gets adapted across markets."