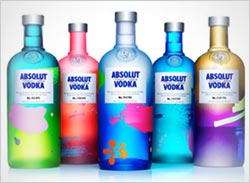 Among some 70 spirits brands, Absolut, Bacardi and Jim Beam took top honors in a new review of their digital marketing competence.

The three were given “genius” marks by digital think tank L2, which based its research on more than 675 data points across four dimensions, including a brand’s Web site, digital marketing, social media and mobile efforts.

In particular, Absolut stood out for its smart microsite and mobile app, which allows users to search for cocktails, and includes a robust how-to section. The brand is also credited for having an active and engaging presence on all three emerging social media platforms, while an Absoluthost.com microsite helps users plan parties.

Bacardi earned its high rank for successfully experimenting with QR codes and a Spotify partnership. L2 also commended the brand’s mobile-optimized site, Mix Master mobile app, and “It Started With A Party” campaign, which was well integrated across platforms.

That said, liquor brands are not considered innovators in the realm of digital marketing, according to Scott Galloway, the founder of L2 and an NYU marketing professor.

“The spirits industry is a digital laggard when compared to its prestige peers,” according to Galloway. “Strong regulation and an opaque online path to purchase, coupled with baby-boomer executive leadership, has resulted in digital underinvestment.”

However, Galloway believes the sector is poised to evolve from a hodgepodge of one-off experiments to a force for digital innovation as millennials emerge as the industry’s target demo, and digital campaigns continue to payoff.

Per L2, featuring videos (with quality content) and user reviews on a brand's site are great ways to increase engagement.