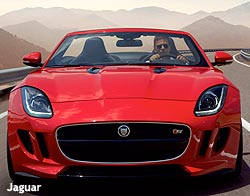 On a freakishly warm, rain-soaked night in the Motor City, Jaguar and Mercedes-Benz reflected with their pre-show presentations a larger theme in the luxury market: expansion of portfolios. Not up, mind you, but down, in an effort to get younger consumers -- future loyalists if things work out -- into their brands. Jaguar touted the new F-Type, which launches toward end of spring, as part of its conquest strategy. This is not an entry vehicle in the least, as it inhabits a fishbowl with Porsche, and perhaps with Mercedes AMG sports cars and BMW 6-Series. But it is a lure for younger, affluent consumers.

Phil Popham, group sales director for the Land Rover sibling, said the F-Type -- first shown at the Los Angeles Auto Show -- will be a conquest vehicle with 80% of buyers new to the brand. He said that based on early interest, the sports car will defy prognostications that sports coupes will vanish from the market. "After we showed it in Los Angeles, we got 25,000 hand raisers. And the average age is 10 years below the current age [for Jaguar buyers]," he said.

Mercedes-Benz talked about its forthcoming CLA compact car, introduced on Monday and also meant to mine -- and conquest -- younger buyers looking to get into luxury. The automaker held a presser on Sunday night as well, showing off the vehicle with a "Three Men and a Baby" reference and an opening act by a hipster band with YouTube fame. Dieter Zetsche, chairman of Daimler AG, said the car would appeal to younger buyers more than C-Class. The CLA will play a role in the Super Bowl but I can't talk it about ... yet.

There's a risk in going "downmarket," of course, as Mercedes-Benz knows from an experiment a few years back, when the brand was playing budget allocation tug-of-war with Chrysler, briefly under Daimler. Larry Dominique, president of TrueCar's ALG research division, noted in a pre-show briefing that entry luxury is challenged by the up-featured, higher end of the mass market as even affluent buyers look for value. And lower pricing has its own drawback. "The badge is really important, but lower MSRP to compete with mass hurts luxury brands."

Dan Creed, VP marketing at BMW North America, tells Marketing Daily that BMW doesn't have the latter issue with its BMW 1-Series partly because it began in the U.S. as a maker of small sports sedans."BMW was built from the bottom up. We have other competitors that started up and have worked down [to smaller vehicles]; it's better to go bottom up than top down.”