Armstrong's Admission Will Move Him Off A-List 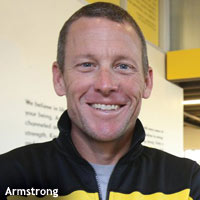 It’s unlikely that Lance Armstrong’s confession to using performance-enhancing drugs during his storied cycling career (whatever revelations come to light in his upcoming Oprah Winfrey interview) will do much to rehabilitate his image in the short term. And even rehabilitating his long-term image will take some time.

“He can recover marginally,” David Johnston, CEO of public relations agency Strategic Vision, tells Marketing Daily, saying it’s unlikely Armstrong will hit the A-list ever again. “It will be over time, and it will be gradual. What he can do to rebuild [his reputation] is to follow up with charitable work, donations and things of that nature.”

In an interview taped Monday, and airing on Oprah Winfrey’s OWN cable network on Thursday and Friday, Armstrong will admit to using performance-enhancing drugs during a cycling career that led to seven Tour de France titles and much acclaim, according to the Associated Press. The admission comes years after denials of doping and after a 1,000-page report from the U.S. Anti-Doping Agency accused him of taking drugs (and encouraging teammates to do the same) on the way to his Tour de France wins. After the report, he was stripped of his seven titles, forced out of his Livestrong cancer charity and dropped by most of his sponsors.

Although Armstrong could work his way back into the public’s good graces over time (like, say, baseball’s Pete Rose), there are several things working against him -- not the least of which is the time it has taken for him to admit wrongdoing, Johnston says. Indications that he may implicate others in subsequent investigations could hurt his reputation further. “He comes across as a liar and a squealer,” Johnston says.

And, unlike Rose, whose athletic accomplishments are undeniable, the nature of Armstrong’s scandal (taking substances to better his performance) brings into question the entire reason that people followed his success in the first place. “Not only was he so stringent in his denials, it now also brings into question, ‘Was he really the athlete we believed he was?’” Johnston says. “He’s more like Barry Bonds, Sammy Sosa and Roger Clemens. There’s always doubt now.”

The good news, if there is any, is that fallout for Livestrong, the cancer charity Armstrong started (and made ubiquitous with yellow rubber wristbands) is unlikely to be too tarnished. “People will separate the two,” Johnston says, noting that the charity received huge support immediately after Armstrong was stripped of his titles. “I don’t think overall that people are going to spite Livestrong in the long term because of Lance Armstrong.”

“The charity is most certainly going to be affected, but predictions of its demise are probably a little overblown,” Craig Bida, executive vice president of social impact at Boston-based Core Communications.  “They are being impacted in some way, but I believe they’re going to endure and survive, as long as they remain focused on the core mission … [The staff and volunteers] haven’t been doing it for Lance. They’ve been doing it for family members or friends or themselves.”

But if anyone emerges a winner in the scandal, it’s Winfrey. Her struggling OWN Network is the beneficiary of all the publicity (including stories like this one) surrounding Armstrong’s confession. “Her network is struggling, and this gives her millions of dollars in free publicity,” Johnston says.

spokesperson, sponsorship, sports
2 comments about "Armstrong's Admission Will Move Him Off A-List".
Check to receive email when comments are posted.
Read more comments >
Next story loading