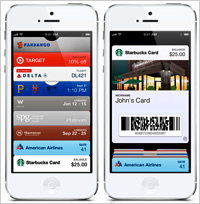 When Apple introduced its Passbook digital-wallet app with the launch of i0S 6 in September, big-name brands and retailers flocked to integrate their own mobile sites and apps with the new feature. It promised users a convenient way to store loyalty cards, coupons, tickets on their iPhones, while giving participating brands a potential leg up on competitors.

At launch, companies saw Passbook-driven spikes in app downloads, as people began loading up their new digital wallets with “Passes.” Walgreens and Fandango saw their apps briefly vaulted into the top 10 in the App Store in the days following Passbook’s debut.

Since then, several of the brands contacted by Online Media Daily that offer Passbook-compatible apps say they have been pleased with the results, although most were reluctant to share specific results.

“We’ve talked to a number of retailers that have found it very effective in terms of loyalty and couponing,” noted Noah Elkin, an analyst covering the mobile space at eMarketer. “The at-hand nature of [Passbook] and the ability of retailers to present that information in a very accessible way to customers is very appealing to both sides.”

Many of the companies adopting Passbook are still experimenting with how best to employ the feature to enhance their mobile offerings and bolster sales. Here are a few company experiences so far:

The digital coupon provider allows iPhone and iPod users to scroll special Passbook offers through its app and mobile site. Currently, it offers about 50 Passbook coupons, or Passes, from 20 retailers and brands, including Banana Republic Outlet, Best Buy, Michael’s, Lane Bryant and Izod. While Coupons.com would not disclose the number of Passbook users, it notes that 70% who viewed Passes added them to Passbook for in-store redemption.

Dhana Pawar, VP, mobile, at Coupons.com, attributes that rate to the quality of the offers -- with 20% off deals being especially popular -- as well as the company’s integration of Passbook on its site and app.

Because Coupons.com works with a cross-section of retailers, it has also gained insight into how Passbook coupons are handled at the point of sale (POS). Sales clerks can either enter barcodes manually from the phone screen or by scanning the code at checkout. For the most part, merchants have not updated their POS technology to support mobile coupons.

To help smooth the process, Coupons.com has added instructions on the back of each Passbook offer, telling cashiers to enter code manually in case a scanning problem arises. Pawar said Coupons.com will try to add more Passbook retailers and experiment with more features like location-awareness, so users are alerted when they are close to one of the partner stores.

Through its app, the drugstore chain allows customers to add its loyalty card, called Balance Rewards, to Passbook. They can use its location feature to select the closest store so the card automatically displays on the iPhone lock screen.

Tim McCauley, senior director of mobile commerce, Walgreens, said Passbook has been a key driver for Balance Rewards -- which launched just a few days before Passbook, and now has 50 million members. Users have to download the Walgreens app in order to activate Passbook and access a virtual version of the loyalty card.

Walgreens had already upgraded its POS technology across all stores to read mobile barcodes, so the checkout process for Passbook was already in place. “With our existing mobile coupon offerings that are scanned from phones, it was a natural carry on from that,” said McCauley. When it comes to smartphones, Walgreens users also skew toward iPhones.

As a longtime partner of Apple, it was hardly surprising that Starbucks was one of the initial retailers integrating Passbook with its app. Like the Walgreen’s version, it’s also location-enable, so the Starbucks Card will appear on the iPhone lock screen when a customer enters a store.

Starbucks says about 20% of its 7 million active mobile payment users globally are now using Passbook. The company declined to provide any further specifics, but a company spokesperson said Passbook “has been an effective way in engaging a new set of customers to the ease and convenience of mobile payment at Starbucks.”