Responsive Type Media: Now You Can Bid Based On A User's Device

Week Two of RTM Daily, and I have yet another new “R” to throw into the mix. It stands for “responsive.” As in responsive design. No, we’re not re-branding this newsletter Responsive Type Media, but increasingly, we will be seeing some real-time media and marketing platforms that incorporate a responsive logic to them. The first I’ve come across was just announced this morning by search advertising platform adMarketplace.com, which now enables advertisers and media buyers to target paid search ads to users based on the “device type” they are querying from. “It’s the first platform for advertiser bidding by mobile device type,” boasts adMarketplace.com President-COO Adam Epstein.

The device type targeting feature is the last element of adMarketplace’s platform, which enables advertisers to target users based on conventional search criteria, as well as traffic sources, and now the device the user is using, and Epstein says that is important real-time data showing not just the intent, but the opportunity to convert a user who is engaged in an active search query. Not surprisingly, it’s also an important new bidding element, and one that advertisers and buyers will need to factor into their bids.

“Up until now, advertisers had to bid based on keywords. Now they have the added ability to change how they target based on the device a user is using,” Epstein explains, noting for example, that the cost of bidding on a large screen mobile phone such as a Samsung Galaxy 2 might be more expensive than bidding on a smaller screen Blackberry 3 or an iPhone 5, because larger screens are found to generate higher conversion rates, and therefore, more valuable prospects.

The adMarketplace bidding feature is the first to acknowledge the differences in the value of not just a platform type -- desktop, tablet, smartphone -- but the specific experience (and behavior) a device’s hardware generates.

“The world is getting hyper-fragmented,” Epstein says of adMarketplace’s innovation. And while this kind of responsive bidding logic inevitably will find its way into the display and video (and ultimately TV) marketplaces, Epstein says it is ideally suited for search ads, because text-based advertising works especially well on small smartphone screens.

“Display is a little harder on a mobile device, because of the smaller screens. We think text works best in that environment,” Epstein asserts. Creative formats aside, the logic behind adMarketplace’s new device-centric targeting platform is powerful, because aside from the user experience, devices are also rich in targeting, intent and conversion data. That’s because different users tend to gravitate toward different types of devices, and there is now meta targeting data based on the behaviors of iPhone users vs. Android users. And that’s reason enough to make device type a biddable function.

It may be awhile before biddable display ad platforms can crack that code, because of the lack of, well, code (you know cookies) in mobile devices. While someone will eventually figure that one out, device type will become an important discriminator in the biddable media marketplace, beginning with search.

“This is where the world is headed,” predicts Epstein. “We started with keywords. We added traffic sources. And now we’re adding user devices.” 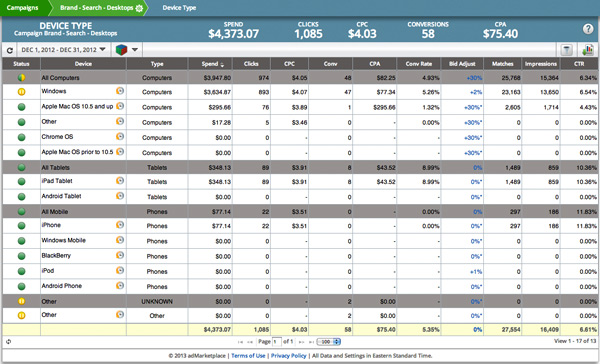