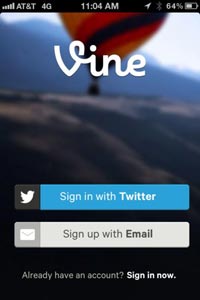 You can’t blame Twitter for expanding its service to embrace more image editing and video services. After all, after the blockbuster success of 140 characters, you need a second act. And a host of other startups have been leveraging the Twitter hashtag and cross-posting to the micro-blog in order to get their own scale. And so shortly after adding Instagram-like image editing and sharing services to its apps, Twitter released the Vine app yesterday.

From the few minutes I have had with the app, its heart clearly is in the right place. Based on technology Twitter acquired, the service mimics the spirit of the 140-character post in video form. Once linked to your social media accounts, the app uses a one-touch method of shooting a six-second clip. While there is no image editing or filtering per se, the creative twist to Vine is that it enables you to stop and start the recording during the short clip to assemble a mini-mash of rapid cuts.

Twitter’s Dick Costolo posted a sample that contracted the making of steak tartare into a rapid-fire clip. Very artful and compelling. There is no doubt one can see brands developing highly creative ways to employ this tool. It is akin to an animated GIF in many respects. Imagine how movie studios could highlight action sequences or infectious quotes from their own properties to feed into the clip-sharing ecosystem. The clips can show up in your feed -- thankfully with sound off by default.

On the other hand, the visual effect of looped six-second clips in one’s Twitter feed is eerie at best, and disorienting at worst. I am reminded of the opening sequences in Ridley Scott’s "Blade Runner" where we swoop into a futuristic Japan that has repurposed skyscrapers as video screens for short loops of product ads. At first glance there is a futuristic coolness to it all. In short order, however, it feels overly busy, and less ordered than the familiar feed.

But more to the point is whether users themselves will embrace the format for posting. The early line on UGC video apps like SocialCam and Viddy was that they would be the next logical step after Instagram’s success. But video is not text and it is not even a snapshot. As much as the Super 8 camera and vidcam were irritating parts of all our childhoods, video-capture is not quite the same reflex as a snapshot. And as Vine itself shows, it is not too easy to capture the right six seconds, let alone craft something as compelling as the steak tartare sample.

I tried to make a couple of Vine posts yesterday at our OMMA RTB show. I caught Havas’s always-animated Rob Griffin making some points in a panel. But the sum total is not substantial. Stopping and starting a six-second video recording is a neat technical trick, but in practice there is no way of knowing what is about to happen in the next few seconds of a moment in order to assemble these clips effectively. This is the sort of thing that works with a lot of pre-planning or good post-production editing. But that is precisely why brand marketers might find the format more interesting than will users.

mobile, social media, twitter, video
1 comment about "Twitter's Vine Shows That 6-Second Video Is Not 'The New 140 Characters'".
Check to receive email when comments are posted.
Next story loading