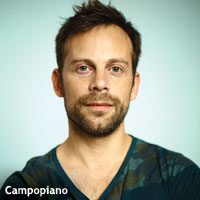 Most recently, Campopiano, a native of Argentina, was regional creative director for Draftfcb’s Latin American region. He was named executive creative director of Draftfcb Argentina in 2010. He is credited with leading the office’s winning effort at the Cannes advertising festival last year, where it was Argentina’s most decorated shop.

Campopiano’s work for brands, including Oreo, Citric, Banco Macro, +vision, Club Social, JVC, ZonaJobs, KY Gel, Compumundo and Piero, all won awards in the past year, per the agency.

Campopiano’s Latin American regional creative director duties will be split between Max Geraldo and Joanna Monteiro, who have been named acting co-regional directors for Latin America.

The agency said Campopiano would partner with Debra Coughlin, global CMO of Draftfcb, who has been appointed to lead the New York office on an interim basis as acting managing director while a search for a permanent successor is underway.