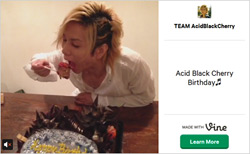 The Twitter-owned video clip editing and sharing network Vine is off to a fast start in the world of mobile video on that micro-blog network. According to social media metrics company Keyhole, over 400,000 Twitter users have accessed Vine, creating more than half a million Tweets. Vine allows users to knit together very short video grabs into 6-second loops that can be posted on social networks and also discovered within the app.

As first reported by TechCrunch, in just a week of release, Vine has won more than 50% of voice among video services that are integrated with Twitter, leading Socialcam (25%), Cinemagram (12.1%) and Telly (11.9%) handily. TechCrunch reports that about half of the videos posted to Twitter in the last week came from Vine.

A Happy Birthday video from musical artist Acid Black Cherry is the most retweeted video from Vine and on Twitter in the last week.

Vine came under fire days after its release as some early adopters used the app to post adult-oriented clips. Initially, Vine is only available on IOS, but Apple is notoriously restrictive about the content it allows featured in apps on the platform. According to reports, Vine adjusted its hashtage search feature to make it more difficult for users to find clips of nude and pornographic subjects.