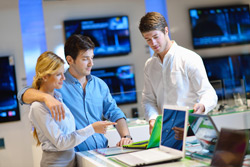 Thirteen-year-olds may not have a lot of disposable income, but they do have an undue amount of influence over the consumer electronics purchases made by older generations.

According to a new study from the Consumer Electronics Association, so-called Youth Millennials (those born between 1995 and 1999) exert considerable influence over their friends’ and family members’ CE purchases. More than half of these Youth Millennials (60%) said they have influence over their parents’ CE purchases, and 41% give advice to their friends and other family members about what to purchase. (Among Adult Millennials -- those born between 1981 and 1994 -- only 33% gave advice to friends and family.)

“When they don’t have the means to purchase [CE products] themselves, they’re requesting it from their family members,” Rhonda Daniel, manager of market research for the CEA, tells Marketing Daily. “When they request a gift, sometimes they specify the brand and model they want.”

Counter to their stereotype as an entirely “plugged in” demographic, Millennials rely just as much on their friends for CE information as they do the Internet. When researching products, they are more likely than other generations to ask people they know about products before purchasing them. They’re also more likely to use blogs and online social networks to learn about the latest CE products.

And counter to the stereotype, many Millennials still prefer to head to brick-and-mortar stores during their purchase process. Forty-two percent of all Millennials said they visit a store before making a purchase, with 55% saying it’s important to touch and feel a product before buying it.

“They like to touch and feel a product. They want to test it out, make sure it’s easy to use and fits into their lifestyle,” Daniel says. Internet purchases may also be prevented by a lack of credit, she adds. “This younger generation, either due to age restrictions or lack of credit history, doesn’t have as much access to credit as previous generations.”