On Monday, real-time digital ad tech company Rocket Fuel released a white paper to answer 10 basic questions people have about programmatic buying. The white paper saw over 100 downloads before it was officially released, so RTM Daily sat down with the principal authors of the white paper, Roland Siebelink, product marketing director, enterprise, and Eshwar Belani, VP, products and business development, to pick their brains about why people in the industry are so anxious for more information on programmatic buying, the future of the market, and where it needs to improve.

RTM Daily: Why are people so hungry for this type of information?

Belani: Programmatic buying has really turned the advertising models upside down. Given the nature of the impact it’s had, compared to how ad budgets were spent three decades ago -- even up until recently -- it’s a big shift.

There’s a lot of pent-up demand for more information, as this space is rife with many new players, lots of changes, technical jargon, and is littered with fragmented and/or obsolete information.

Siebelink: Many folks who have been in advertising for a while, including those on the traditional side…they are very keen and eager to learn more about what this is all about and how it’s going to change things for the better.

RTM Daily: Why create this white paper? Why now?

Belani: As we’ve gone out and represented ourselves on the marketplace, we have had to explain the nuts and bolts to many folks over and over again. We found many people to be unaware of these concepts, and they were still trying to learn the basics about programmatic buying.

Siebelink: What we thought would be worthwhile would be to publish a white paper that would act as a good tool to communicate these concepts to everyone. It’s going to be worthwhile in general for everyone to keep up with these industry trends.

RTM Daily: Where do humans fit into the picture?

Siebelink: We think that humans have a very, very important role to play in managing programmatic buying. We try to help humans refocus on where their strengths are. Essentially, humans are best at focusing on strategy, not spreadsheets. That’s the essence of what humankind is really good at in our space.

With programmatic buying, advertising on the Web becomes a giant research lab, and presents a tremendous opportunity to think, “Hmm, this message didn’t resonate. Why not?” The machines are there to illuminate in that regard, but ultimately it’s the human spirit that can be strategic and can provide those answers.

Belani: There are many different types of tasks that need to happen, and we know from experience that machines are better at eliminating the grunt work, grudge work, and guesswork to make campaigns successful.

RTM Daily: Did the real-time media space grow as you expected in 2012? Q4 was huge, but did it meet expectations?

Belani: Yes. If anything, it went beyond expectations. The market just kept growing tremendously. People started moving bigger budgets, and budgets across the funnel into programmatic buying. And that growth is still increasing.

RTM Daily: What do you think happens with programmatic in 2013?

Belani: Nobody can really look into the future, but we do see growth continuing. We don’t see a compelling reason why programmatic wouldn’t take over a very large share of digital advertising at some point in time. For now it’s very strong, but there could always be disruptions in the space or other things we haven’t taken into account. IDC has projected that programmatic buying will grow at a CAGR of 53% between 2011 and 2016.

(From the white paper): 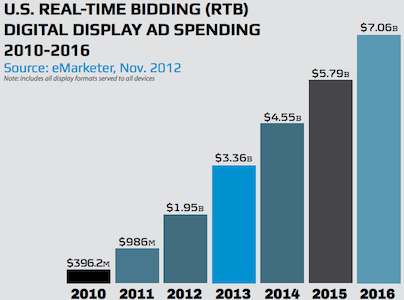 Siebelink: We are seeing strong interest in the [programmatic] space. On the advertiser’s side, there are solid media budgets getting allocated. On the publisher’s side, what we’ve seen is an increase in the inventory that is accessible via programmatic means, resulting in a strong increase in the total bid volume. We’ve also seen new channels like social [Facebook] embracing programmatic buying.

Belani: All signals seem to be pointing to increased growth, and there is a snowball effect -- as more inventory flows into this medium, campaigns can be run more effectively, thereby driving greater value to advertisers which results in increased spend.

RTM Daily: What channels will programmatic thrive in? Which still need work?

Belani: We would say display and social are promising channels for growth. Given the early results we’ve seen in social, it has the potential to grow faster than display.

Video and mobile are also catching up rapidly. Video will grow faster, as advertisers move larger portions of their brand budgets online.

Siebelink: On the mobile front, there are some open questions that are all actively being worked on in the industry. The questions are related to basic user identity and figuring out how to close the loop [for campaigns]. It will take a little more time.

There are some basic capabilities that we are so accustomed to in other channels that on the mobile side are still actively being worked out. As those get addressed, mobile will experience tremendous growth.

Belani: We wouldn’t call them flaws per se, but maybe there are different aspects that can be worked on, and improved. So, no glaring flaws.

The rise of programmatic buying has raised the issue of privacy. When you can deliver on the promise of one-to-one marketing, and serve ads with behavioral data, it opens up the privacy debate. It’s not unique to programmatic, but this new technology has accentuated it in some sense.

The other aspect in programmatic today -- again, not a flaw but more in the spirit of “this is an area that can improve” -- is that we still seem to have a limited number of creative ad formats. It’s opening up, but there are only some private exchanges and some publishers that allow for increased variety.

If there’s a way to open this up to essentially support all forms of advertising, if we could bring all the power of programmatic buying to traditional buys [including TV] and open up the budgets for the digital industry.

Siebelink: Programmatic could also work on tying consumers across channels. These aren’t flaws, but opportunities for how it could evolve.

When people first enter into this space, they come with the experience of prescriptive segment targeting that worked really well in the traditional media world. But as we point out in the white paper, prescriptive targeting doesn’t necessarily work optimally in a programmatic environment.

Programmatic has very liberating opportunities and we see it as the future of advertising. There needs to be a nuanced approach to programmatic buying. We want to make sure the industry gets it right, and that there are educated and informed buyers on the other side of the table. People really want to know more about this topic and we hope that this paper can contribute toward that wisdom.