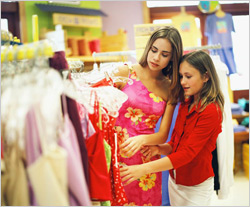 While there’s no denying that consumers are increasingly using social media in just about every area of their lives, they still aren’t into shopping there. A new global study from PwC, the global consultancy, reports that last year, only 12% of consumers bought anything through social media.

Nor does social media buzz do much to drive sales: Only 18% of those consumers active in social media made a purchase as a result of information they got via their social-media connections.

“Our survey data shows that social media will, for the near future, remain a backwater sales channel, if you can call it a sales channel at all,” the report says. “While about half of respondents say they’re checking out social media sites daily, only a tiny minority uses the sites frequently to shop. In fact, seven out of ten online shoppers who took our survey say they never shop this way. That should remain the status quo for the immediate future.”

But the survey, based on 11,000 people in 11 countries, did highlight a fast-growing willingness to interact with brands via social media, with 59% saying they follow brands through social channels, up from 49% last year. And 27% say they’ve discovered brands they didn’t know about this way, compared with 17% last year.

One big exception is China, where one in four shoppers has already made a purchase via social media.

PwC has classified them in three different groups:

*Brand lovers - This segment offers the most potential for future shopping, and includes the 38% of consumers now following brands and retailers, up from 33% last year. And they are the fiercest shoppers, with 53% going into an actual store at least weekly (compared with 45% of the overall sample), and 45% making at least one online purchase per week.

*Deal hunters - Nearly half of the survey fell into this category, and will click through to online stores if they think they’ve spotted an appealing offer.

*Social addicts - While the smallest group, this minority uses social media “to talk about their experiences with brands, learn what their friends like and recommend, find customer service answers, and submit ideas and product feedback to companies,” the report notes. Failing to include these evangelists “carries significant reputational risk, as these very active online users tend to have huge social media networks and wield an outsized influence.”

Its slow start as a commerce channel notwithstanding, social media continues to be a critical component of brand building. “Despite its inability to lead directly to a purchase, social media activity is a pretty strong indicator of how much some shoppers will buy, both online and in stores,” the report says, “so...the impact social media has on the brand needs to be part of every multichannel strategy discussion. It’s clearly a robust marketing and communications tool for retailers and consumer product companies.”